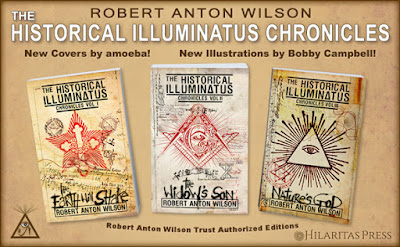 The RAW Trust and Hilaritas Press have announced the release of all three of Robert Anton Wilson's "Historical Illuminatus!" books, in print and as ebooks: The Earth Will Shake, The Widow's Son and Nature's God.

All three feature beautiful new covers by Scott McPherson and wonderful new illustrations by Bobby Campbell (about which more tomorrow). And the marketing features this quote:

"Against the epic backdrop of the French and American revolutions, the inimitable RAW lays bare the secret history of the Enlightenment, while almost casually re-inventing the historical novel in the process. The result is a heady, psychedelic brew of satire, intrigue, magic, high adventure and life-changing philosophy, seasoned with the wry, compassionate humanism which is Wilson's trademark. Astonishing and unforgettable."

Full announcement here.  I've linked the purchasing pages of the books to their titles above.