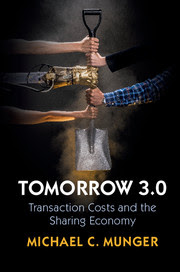 An academic I've long admired, Michael Munger, has a new book out that discussed the gig economy and makes a case for the basic income. The book is Tomorrow 3.0:
Transaction Costs and the Sharing Economy. Here is the description from Cambridge University Press:

With the growing popularity of apps such as Uber and Airbnb, there has been a keen interest in the rise of the sharing economy. Michael C. Munger brings these new trends in the economy down to earth by focusing on their relation to the fundamental economic concept of transaction costs. In doing so Munger brings a fresh perspective on the 'sharing economy' in clear and engaging writing that is accessible to both general and specialist readers. He shows how, for the first time, entrepreneurs can sell reductions in transaction costs, rather than reductions in the costs of the products themselves. He predicts that smartphones will be used to commodify excess capacity, and reaches the controversial conclusion that a basic income will be required as a consequence of this new 'transaction costs revolution'.

Here is a review.  He also discusses basic income in this podcast, which I'll listen to when I finish my current audiobook.

Also, a New Yorker article on basic income, which references several recent books, including the Annie Lowrey book I mentioned earlier.
on July 04, 2018