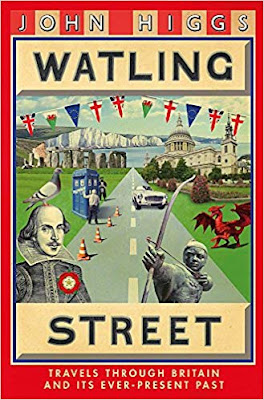 John Higgs' book about Britain's past and present, Watling Street, came out last year, and so I am late in talking about it, although in one sense I am right on time: The paperback and audiobook have just come out. In any event, it's a very good book. (It was not published in the U.S., but Americans can order it from websites such as amazon.ca and The Book Depository.)

Watling Street is a very old road that runs from the cliffs of Dover across the island into northern Wales, and Higgs travels down it, writing about the history of places along the road. Higgs goes back to some very old history but also discusses fairly recent events (there's a chapter on Bletchley Park, of World War II code-breaking fame, although disappointingly he doesn't mention Neal Stephenson), but it's not all about history. There's also meaty chapters about two writers that many RAW fans like, Alan Moore and Steve Moore.

Higgs gives a shout out to RAW fans by using the number 23 over and over again, but many of the topics he discusses (the arbitrariness of boundaries, how landowners got their land, the workings of privilege) show what I detect to be the influence of Wilson's thoughts on such matters, and Wilson is mentioned in Higgs' acknowledgements.

At one point in the book, Higgs mentions that cockfighting was outlawed in Britain in 1835. In Oklahoma, the state I lived in for most of my life, it was only outlawed in 2002. (John Monks, a Democratic state lawmaker from Muskogee, was famous for saying that the first things Communists do when they take over a country is outlaw cockfighting.) So if my math is correct, Oklahoma is 167 years behind Britain in terms of social consciousness. Many people in Oklahoma probably would have to admit that is about correct.
on July 17, 2018

I'm pretty sure the Steve Moore-RAW fandom consists of me and John Higgs at this point in time. Hopefully after reading Somnium I'l get you on board as well.

There's three of us at least, since I read Unearthing, Alan's book about Steve.

Hey, that's good to hear! Unearthing is amazing and the LP from Lex is really nice. I really want to get more people to read Somnium and Tales of Telguuth and I can't wait until his nonfiction study of Selene is published.