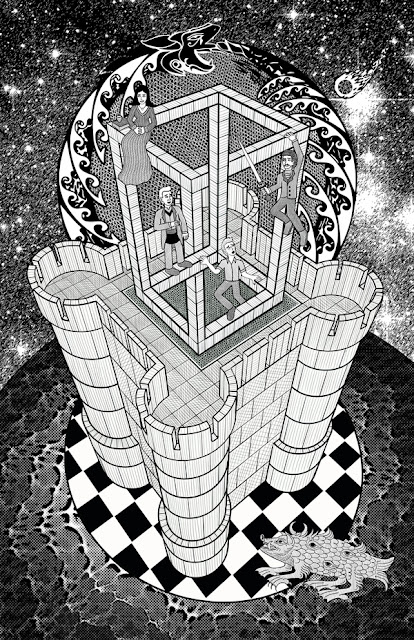 The above is one of Bobby Campbell's arresting new illustrations from the new edition of The Widow's Son, one of the three "Historical Illuminatus" books that have just been published by Hilaritas Press, the publishing imprint of the Robert Anton Wilson Trust.

Bobby has now written a new article on how to came to do the new illustrations, and there is also new information in the piece that I've never seen anywhere else about Robert Anton Wilson's literary influences as he wrote he first novel in the trilogy.

Bobby notes that  the same week he was listening to an audiobook version of James Joyce’s Portrait of the Artist as a Young Man, he noticed a very similar scene from Wilson in The Earth Will Shake about "Sigismundo Celine being indoctrinated into the Catholic version of hell."

When Bobby raised the matter in a Maybe Logic Academy online course being taught by Wilson, Wilson wrote “No writer ever knows consciously all the influences on his work
but I did know the influence of Portrait of the Artist on Earth Will Shake & two others you didn’t mention: Huckleberry Finn by Twain and Intruder in the Dust by Faulkner. Replace religious bigotry with racism and you’ll see the Mississippi/Napoli parallel."

Wilson also wrote, "Huck Finn decides that even if hell exists, he’d rather go there than send Jim back to slavery, the most moving scene in American literature to me; I can’t even write this brief summary of it without tears coming. Siggy makes a similar choice I’m not as good a writer as Twain.”

Bobby's illustrations from the book will be displayed in the art show at Confluence, the SF convention being held in Pittsburgh July 27-29. Bobby will be at the convention, and so will Greg Arnott and myself. More on that soon.
on July 11, 2018

Here's another interesting bit of perhaps new info that RAW provided in that exchange, that I omitted for the sake of brevity:

"Charles in Intruder also has to make
that kind of decision...

After Intruder try Go Down, Moses for more
about Lucas and his black and white relatives;
Snafu law first came to me from that book, viz:

'To the sheriff, Lucas was just another n*****, and they both knew that;
to Lucas, the sheriff was an ignorant redneck with no cause
for pride in his ancestors, nor any hope for it in his posterity,
but only one of them knew that.'"


Thanks for the additional bit, Bobby!