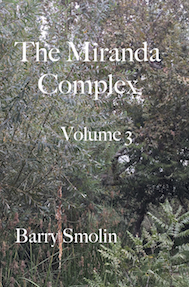 Fausto Marcon recently posted on the Facebook group Robert Anton Wilson Fans, “who's the contemporary RAW? seriously, any other like him? Who's spreading the verb nowadays?” I would like to nominate Barry Smolin, whose The Miranda Complex Volume 3 I just finished. I devoured this 378 novel in four days, much as I had volumes one and two. I found the novel hilarious and true, even though the protagonist experienced infinitely more sex and drugs in high school than I did.

On page 51 the protagonist Lance Atlas quotes Samuel Beckett, “But habit is a great deadener.” (I wonder if Beckett learned this from Proust?) Smolin’s novel takes the day to day activities of an LA high school student in the 1977-1978 school year and uses them to paint a cosmic canvas which brings readers alive, hopefully awakening them from habitual fear.

Volume 1 quickly made reference to the Miranda from Shakespeare’s Tempest. Smolin brings that up again in Volume 3 when Lance reads the play in his senior English AP English class, acting out the role of Prince Ferdinand. I imagine Smolin based Lance on his own high school self much as Joyce based Stephen Dedalus on his own youth. (And yes, Lance also reads Portrait of the Artist as a Young Man in that English class.) If young Lance also corresponds with the youthful prince in The Tempest, perhaps the adult novelist Smolin plays the role of Prospero. Later in the novel Lance listens to a recording of a speech by Prospero read by Jonathan Frid who played Barnabas Collins on Dark Shadows. I love how Smolin incorporates so many cultural references that resonate for me, from Dark Shadows to Proust and, of course, the Grateful Dead. A Dead concert on January 10, 1978, plays a pivotal role in the novel.

I cannot recommend this trilogy highly enough. Please check it out

Eric Wagner is a writer and teacher who lives in the Los Angeles area. He is the author of An Insider's Guide to Robert Anton Wilson. See also Mr. Wagner's previous post on Barry Smolin. -- The Management.

Thank you for posting this. I loved this trilogy.