Historical Illuminatus up next from Hilaritas 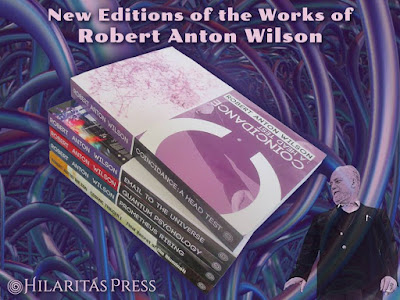 Richard Rasa has a new post up at Facebook to publicize some exciting news: The three Historical Illuminatus! novels will be the next new publications from Hilaritas Press, the publishing arm of the Robert Anton Wilson Trust. I am particularly excited to see what Hilaritas will do with the first two, The Earth Will Shake and The Widow's Son.  Bobby Campbell is doing new art for the books, and I know that a lot of copyediting has been done (Gregory Arnott has been working on The Widow's Son.)

In the meantime, as Rasa's new meme, above, illustrates, Hilaritas already has republished definitive editions of five core RAW books: Cosmic Trigger 1, Prometheus Rising, Quantum Psychology, Email to the Universe and Coincidance: A Head Test.  All are available in print and as ebooks.