'The Adventures of Acidman' looks interesting 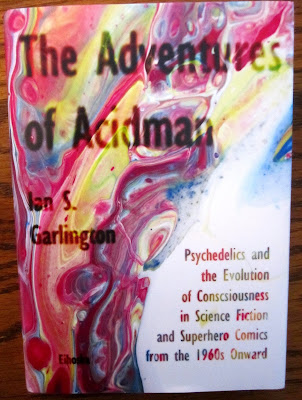 Here is the blurb for The Adventures of Acidman: Psychedelics and the Evolution of Consciousness in Science Fiction and Superhero Comics from the 1960s Onward by Ian S. Garlington:

This research project explores the connections between psychedelics and the ways that SF and comics writers have envisioned superhuman or evolved human consciousness. More specifically it considers how the writing techniques associated with high literary modernism (Joyce, Pound and so on) would be employed in revolutionary new ways within an emerging sub-genre of SF of which the superhero narrative in its pure, non-ideological form, is but a single instance. The introduction will explain why this project is a cosmic imperative and the subsequent chapters will offer evidence for these absurd claims through in-depth textual analyses of the works of Thomas M. Disch, Robert Anton Wilson, Robert Crumb, Alan Moore and Grant Morrison. Lick the Leary epigraph to see if you are one of the lucky 23!

It sounds interesting; has anyone read it? I only heard of it when I saw Adam Gorightly's blog post, "Emails from the Acidman."