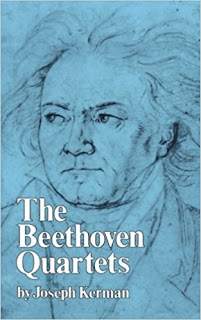 About the Kerman book, Eric says, " I gave copies of this book to both Robert Anton Wilson and Rafi Zabor. I took a copy of it with me when I appeared on Jeopardy."

Wait, what? I asked Eric the obvious follow-up question.

" I won $10,001 and the home version of the game when I appeared Jeopardy November 30 and December 1, 1999, and I got to talk with Alec Trebek about E-Prime and Aleister Crowley on national television. My Double Jeopardy categories included "Shakespeare" and "Movie Quotes". When my wife in the audience saw the categories, she turned to her son and said, "We're going to Paris."

Eric trampling his opponents. And he didn't even get any Beethoven questions!
on February 16, 2018

Looks like I misremembered how much I won. In any event, I can't wait for the Kerman group to start. The book does have some technical musical discussion, but it also has a lot of fascinating non-technical stuff, so I suspect even people who don't read music will enjoy it.

I watched that episode of Jeopardy! Didn't you get a Pound of Crowley Q (really: A) Eric?

After the first commercial break Alec chats with each contestant. On the first show we chatted about E-Prime. On the second show we talked about alternative calendars, including the Thelemic.