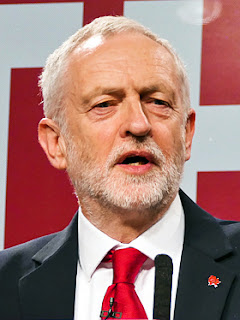 
UPDATE: If you are curious, May's political party gained more seats in Parliament than anyone else but lost its majority and will have to try to cobble together a coalition to survive.  The election is widely seen as a vindication for Corbyn.  The Liberal Democrats picked up a couple of seats.

The British election is today. I don't understand British politics. I thought part of the point of a parliamentary system is that, unlike the U.S., you get more than two choices. So how come all I see on Twitter is stuff about Corbyn and May? I am curious about the Liberal Democrats, but commenters the election, such as Sean Gabb, don't seem to be interested in the party.

Steve Fly has a commentary on the election. He sees reading Robert Anton Wilson as at least a partial antidote to social media nastiness:

After studying the works of Robert Anton Wilson for over 20 years, i can't shake this general love for all humanity and the ongoing practice of tolerance and forgiveness, at the heart of his works. When his daughter was beaten to death, and they found the culprit, he and his wife did not call for the death penalty. Instead, they managed to find it within themselves to forgive, and even love the murderer. I wonder why forgiveness can make many people so angry? who continue to bang the drums of retribution?

I get the impression from social media, especially Facebook, that this angry mob have studied torture techniques, writing without missing a beat, of what they would 'do' to their enemies. Anything like a fair trial, or non-violent punishment is simply out of the question for them. Angry people full of hate want to get even and inflict an equal amount of suffering upon their enemies. The cycle of violence and retaliation continues. The work of RAW has been a countermeasure to this kind of certitude, and hate fueled ignorance. I sincerely wish more people would read his work, and have the courage to act upon it.

My own feeling is that politics makes people mean and stupid and that there is too much emphasis in modern society in picking your "team" and rooting for it.

Sean Gabb, by the way, is reliably interesting, even if you don't agree with him. Here is a bit from his latest piece:

Because Jeremy Corbyn is hated by virtually the whole of the political and media class, she [Theresa May] was cried up, through her first ten months in office, as some kind of political giant. She was urged into calling the present election, because everyone important thought it would be a disaster for Mr Corbyn. She obviously believed what she was told, and spent the first week of the campaign smirking at the prospect of a three-figure majority. Then, even the combined BBC and media oligarchs were unable to prevent us from taking a good look at the woman, and concluding that she was probably unfit to run a jumble sale.
on June 08, 2017