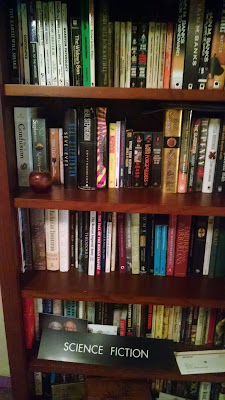 I do still have some paper books. There are more besides these.

Butterfly Language has a piece up, "The Old Hoard and Purge," about Val's habit of going through her stuff periodically and ruthlessly reducing it. Val has worked in the comics industry, so apparently via freebies she could easily turn her home into a fire trap if she wasn't careful. She has advice on how to avoid hoarding.

Not that I'm trying to defend hoarding, but there's something to be said for saving some stuff. Robert Anton Wilson moved around a lot in his life and didn't save many of his manuscripts, or papers, or clips of his articles. As a result, there are no "RAW papers" in a university collection anywhere, and the RAW-Robert Shea correspondence has been lost, or at least is MIA. I'll  complain about that missing correspondence until it finally gets found, if it ever does.

My own fight against hoarding consists not of purges, but a steady state battle, in which every few weeks another bag of books is hauled off to the local used bookstore. I still have a library of paper books, mainly stuff I can't bear to give up, but I've reduced the total. Over the years, I have shifted so that while I still have a fair amount of paper books and musical CDs, much of my stuff is digital and in the cloud. If, God forbid, a disaster took away the stuff in my house, I would still have a big library of books and music safe in the cloud, ready for me to access. I find that comforting.