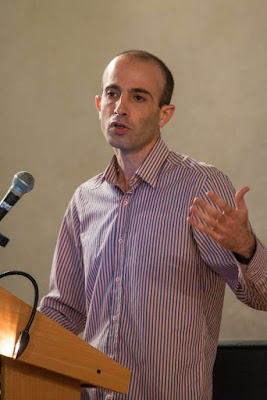 
A recent book has revived the SMI2LE program promoted by Timothy Leary and also promoted by Robert Anton Wilson, according to Alastair Fruish, the British writer.

Homo Deus: A Brief History of Tomorrow by the Israeli writer Yuval Noah Harari was published in Hebrew in 2015 and came out in English translation last year. According to the Wikipedia article on the book, "Harari prophesies the replacement of humankind with a super-man, or 'homo deus' (human god) endowed with supernatural abilities such as eternal life."

If you are unclear on Leary's SMI2LE formula, a refresher from the Leary bio on Wikipedia: "He adopted the acronym "SMI²LE" as a succinct summary of his pre-transhumanist agenda: SM (Space Migration) + I² (intelligence increase) + LE (Life extension), and credited the L5 Society co-founder Keith Henson with helping develop his interest in space migration."

I heard Alastair Fruish mention the Yuval book on a podcast as a kind of return to SMI2LE  and I emailed Alastair to ask if I'd heard the title correctly.

He wrote back that I had the correct book, and as far as he can remember, Yuval doesn't mention Leary or Wilson or Leary's formula.

"But there were similarities with the ideas. It's a futurism book," Fruish wrote.

"I enjoyed it. But not as much as his first one, Sapiens, which also has something in common with some of Wilson's ideas," he wrote.
on June 15, 2017