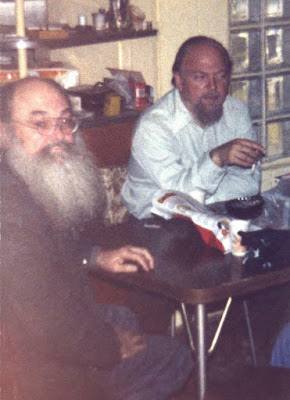 RAW with Grady Louis McMurtry of the OTO 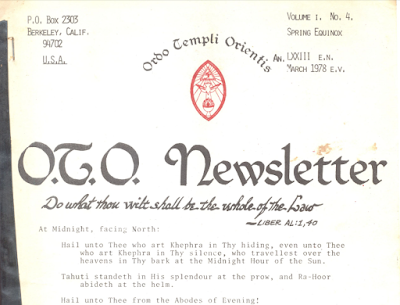 [This is a review of Robert Anton Wilson's Cosmic Trigger that ran in an Ordo Templi Orientis newsletter in 1978. Martin Wagner, who sent it to me, remarks that it's a real rarity. The newsletter was sent out from Grand Lodge Berkeley, and McMurtry is mentioned in Cosmic Trigger as a guest at a Crowleymass party RAW gave. -- The Management.]

COSMIC TRIGGER "FINAL SECRET OF THE ILLUMINATI."
by Robert Anton Wilson, And/Or Press, $4.95.

Having been a follower of the writings of Robert Anton Wilson for the past five years, I was delighted to see "Cosmic Trigger" published at last!

Up until two and a half years ago, Mr. Wilson was a brilliant, yet undeservedly obscure writer on subjects relating to the occult and evolving psychic potentials in the human species.

He first came to my attention in 1972 e.v. through a number of articles written for Gnostica News.

The one thing that impressed me then (and still does) is the originality in his approach to the subject, as opposed to the usual scissors and paste technique of so many authors.

In the fall of 1975 e.v. the "Illuminatus Trilogy" was published.  While I enjoyed this work very much, I felt that it was not a true representation of what Mr. Wilson was capable of producing.
I realized that I would have to wait a bit longer for a truly serious book.

In Oct. of 1976 e.v. (at the time he was writing "Cosmic Trigger") I was fortunate enough to have taken a class in Exo-Psychology from Mr. Wilson.

At that time I got a preview of the information he was correlating for "Cosmic Trigger", yet I had to wait another year before he was able to get the damned thing published.

Probably the most important aspect of "Cosmic Trigger" is Mr. Wilson's attempt to connect a wide variety of seemingly unconnected phenomena into a pattern, into a web of cognitive intelligence.

Rather than attempting to impose a structured view of reality on the reader, Mr. Wilson presents many models of viewing the universe, allowing the reader to create a unique point of view.

Pancakes from outer-space, Aleister Crowley, immortality, Timothy Leary, Quantum Mechanics, multiple universes, evolving DNA consciousness, the Iluminati, LSD, the Dog Star, etc.,etc., begin to form into a unique mosaic of the possible realities beyond the veil of the logical mind.

The book escapes the trap of merely relaying a bunch of unexplainable phenomena, such as was done by Charles Fort.  It also succeeds in transcending the limitations inherent in a guru-chela type of relationship.

The reader is given the impression of being a fellow traveler with Mr. Wilson rather than being the recipient of a lecture from some god almighty authority.

The book is also a very personal biography of the author.  It is a personal account of his unfolding consciousness.

Mr. Wilson goes beyond portraying second hand experiences, and explains many personal experiences with "THEM" in a most objective and non-dogmatic style.

I consider this book to be very important in the work of propagating the Law of Thelema.  This is one of the few books out to explain the importance of the work of Aleister Crowley beyond the usual "occult" category.

The book does much in dispelling the malignant shadow of the "demon Crowley" which has been fostered on the general public for so long.

The book is also of special interest to those of us working with the O.T.O. through the auspices of Hymenaeus Alpha.

Cosmic Trigger contains many interesting tales about the Caliph, even though Grady's name was inadvertently spelled "McMurty" throughout the book.

(correct spelling: "McMurtry". Also, note that "Stephen McAuley" is not "Stephen McCaully's" correct name either.  Such errors are easy to make.
I blew the spelling of the Caliph's name on the caption of the photo on page 17 of this Newsletter!  Not only that, but Hymenaeus is incorrectly spelled on the Copyright notice for Issue #1 ... A note from your chagrined Editor.)

In the interest of historical accuracy, it should be noted that the story on page 161 of "Cosmic Trigger" concerning the Abramelin and Enochian entities got a bit jumbled.

Aleister told Grady that it was the Enochian Angles who "bite" and the Abramelin Spirits who "come for you," rather than the other way around as recorded by Mr. Wilson.  Nevertheless the essence of the transmission came through.

On the inside of the back cover, it is claimed that Mr. Wilson is a member of O.T.O.

To prevent any misunderstanding it should be noted that Mr.  Wilson was not initiated through the auspices of the Grand Lodge in Berkeley ("Possibly Franco-Haitian?")

He also stated that he was given the IXth degree by this person in return for elevating this person to the exalted position of "Grant Master of the Bavarian Illuminati."

Knowing Mr. Wilson's sense of humor, I tend to classify this story in the same file as the mysterious pancakes from Outer-Space.  I'm sure it would be interesting to the readers of this Newsletter if Mr. Wilson should verify, or retract this story in time for the next Newsletter.

"Cosmic Trigger" is a very complex and interesting book.  In a short review it is difficult to accurately convey it's many brilliant facets.  All I can say in conclusion is pick it up and decide for yourself.
It's going to be with us for a number of years.

P.S. If after reading "Cosmic Trigger" you have yet to discover the "final secret" of the Illuminati, read Mr. Wilson's introduction to "Zen Without Zen Masters" by Camden Banares.
on June 18, 2017

Am curious if Bob did ever "verify or retract"?

Interesting review, thanks for posting. I disagree with the reviewer about Wilson getting it wrong regarding Crowley saying the Abramelin spirits bite while Enochian Angels come for you. I haven't been able to find a source for this outside of Cosmic Trigger. There are several warnings about Abramelin spirits that can be found, I suspect they're the ones who "bite."

@Cat Vincent
He did not, at least not in one of the following newsletters.

The person on the right in the header photo appears to be John Brunner.