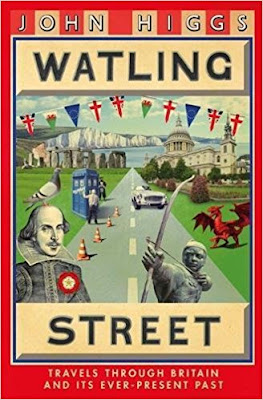 The wonderful British author John Higgs is featured in the latest podcast from the Psychedelic Detectives. It was so interesting I would up staying up later than I had planned last night to finish all of it. John and the PD boys go on for about an hour and 11 minutes. Naturally, his latest book comes up (Watling Street: Travels Through Britain and Its Ever-Present Past, due out July 12 in Britain). But John also talks about Robert Anton Wilson and reality tunnels, his decision to become a full time writer (reminiscent of RAW's decision, as detailed, I believe, in Cosmic Trigger), intelligent optimism and just doing something interesting rather than worrying about if it is impossible, Project Mindfix, his favorite Dr. Who, David Lynch (turns out Alan Moore is a Twin Peaks fan), art that is transformative rather than the same old thing you've heard before,  and his love for heavy metal music. (He and Brian Shields would have much to talk about if they had ever met.) Also what he and the podcasters think of the last couple of "Star Wars" movies, and why John doesn't bombard you with his political opinions on Twitter.

I don't have a U.S. publication date for Watling Street, but the Amazon UK link above says, "This item can be delivered in the United States."

I also can't tell you much about the Psychedelic Detectives; if there's a bio or a useful "About" document somewhere, I couldn't find it. There are two of them, but you mostly hear from one of them, they have a Soundcloud account which lists all of their episodes,  they want you to stream their episodes rather than downloading them, they are on Twitter,  and a bunch of the other episodes look interesting.