'Fernandoo Poo will not become another Laos' 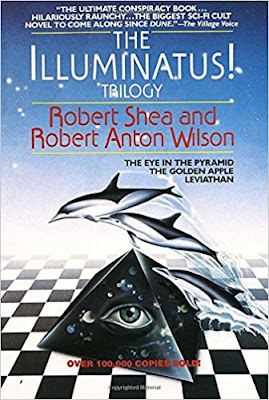 "Fernando Poo," the President of the United States told reporters even as Atlanta was calling for all-out war, "will not become another Laos, or another Costa Rica."

"Our Present Plans for Withdrawal are going Forward according to an Orderly Schedule, the President began;

Illuminatus! page 70 of the omnibus paperback

I know there are critics of Illuminatus! who call it a product of its time, but it seems evergreen to me. The above passage scarcely seems like satire. I worry that the U.S. policy of endless war has become normalized.

I Tweeted the above link, with the comment, "Some news for the libertarians who supported Trump." I got seven retweets and 16 likes, which made me feel I wasn't completely alone.
on June 17, 2017

What has changed since Vietnam?

On page 1 of May, 1970 issue: "If you've always thought that Americans are a violent people, you've got another think coming. When it comes to deserting from the armed forces, we Americans have a perfectly WONDERFUL record. In fact, the rate of our desertions - from the Revolutionary War onwards - should be an unending source of national pride (or national shame, depending on how you look at it). And as the Vietnam war goes on, and on, ad infinitum and ad nauseum, our record gets better all the time."

Has anything changed since Vietnam? The US has increased number of wars?