How the CIA worked with drug traffickers 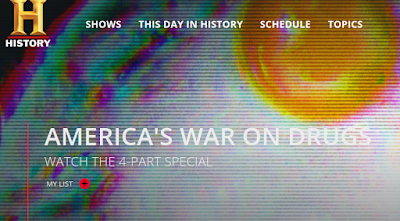 A new documentary on the History Channel, "America's War on Drugs," apparently tells the story of how the CIA has worked with drug traffickers.  It's available online at the link. I have not seen it yet, but it sounds interesting.

The Intercept has an article about the series:  "The war on drugs has always been a pointless sham. For decades the federal government has engaged in a shifting series of alliances of convenience with some of the world’s largest drug cartels. So while the U.S. incarceration rate has quintupled since President Richard Nixon first declared the war on drugs in 1971, top narcotics dealers have simultaneously enjoyed protection at the highest levels of power in America."

Supergee also has a related post about a Reason podcast, appropriately tagged "War on some drugs."