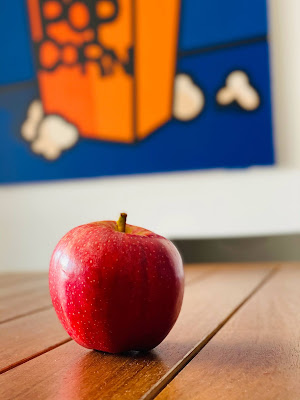 An apparent image of what appears to be an apple. Unsplash photo by Chris Dez

The latest Martin Wagner discovery is "Objections to Objectivism." It's a detailed critique of Ayn Rand.

Much of it discusses what is happening when a viewer gazes at an object that seems to be an apple, and I found it easier to follow than the "chair letter" mentioned yesterday. Excerpt:

Again, let us be country-simple here. The objects, events, experiences, of the non-verbal level appear, in the light of modern science, as creations of our nervous systems, just like the verbal level. That is, the space-time event which we call “an apple” exists evidently somewhere outside our skins, and, according to the most reliable (useful) equations, has a structure which can best be visualized or imagined as superimposition of waves of energy. The objective “apple” which we perceive does not contain this energy structure, which is known to us only by scientific and mathematical analysis and experiment; the “apple” of perception—the object—is manufactured by our senses and brain as they integrate various stimuli coming in from the energy-apple somewhere out there.

The invisible apple, the apple that we don’t see, the mathematical physicist’s or chemist’s “apple”, of course, contains the vitamins, flavor and other properties that make apples desirable to us. The visible apple, constructed by our nervous system, may not contain these needed elements—i.e., it may be a plastic or other artificial device designed to look like the invisible energy-apple that we really want.

Now, just as the objective apple (manufactured by our lower nervous system) is more dynamic than the word “apple” manufactured by higher levels of our nervous system), the external, invisible energy-apple appears still more dynamic. Every electron in it, for instance, is nonidentical with itself from second to second. (Every point has a date, in the Einstein-Minnkowski space-time manifold.)