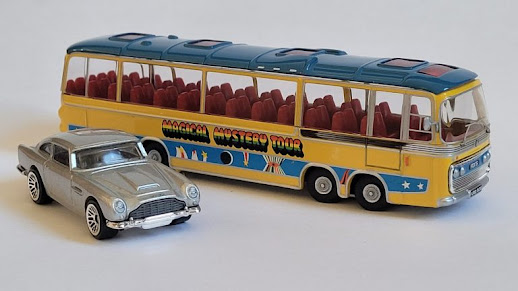 When John Higgs said he was about to announce a new book, I looked at the visual cues and suggested the title might be Bonding with The Beatles.
I was in the general neighborhood. John's new book is called Love and Let Die.
From the press release:
"The Beatles are the biggest band there has ever been. James Bond is the single most successful movie character of all time. They are also twins. Dr No, the first Bond film, and Love Me Do, the first Beatles record, were both released on the same day – Friday 5 October 1962. Most countries can only dream of a cultural export becoming a worldwide phenomenon on this scale. For Britain to produce two on the same windy October afternoon is unprecedented.
"LOVE AND LET DIE is a story about two opposite aspects of the British psyche exploding into global culture. It is a clash between working class liberation and establishment control, told over a period of sixty dramatic years. It is also an account of our aspirations and fantasies, and of competing visions of male identity. Looking at these cultural touchstones again in this new context will forever change your understanding of the Beatles, the James Bond films, and six decades of British culture."
More from John at the link.
on October 06, 2021

Hate the title if only cos it’s Paul, not the Beatles, although it might grow on me. Can’t wait to read it though—I love Higgs.