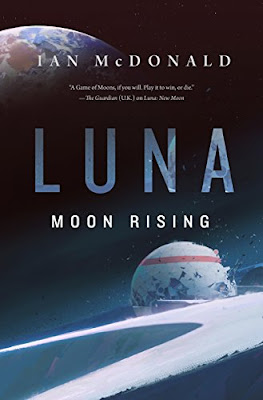 [I am one of the members of the 12-person judging committee mentioned in this press release, so this list of finalists is partially my fault. I like all of the books that are finalists. I particularly like Luna: Moon Rising -- I think all of Ian McDonald's Luna books are wonderful. Two of our nominees are British -- Edwards and McDonald -- and three of the six authors are women. Below is the official press release. -- The Management]

The Libertarian Futurist Society, a nonprofit all-volunteer international organization of freedom-loving science fiction fans, has announced five finalists for the Best Novel category of the 40th annual Prometheus Awards. The Best Novel winner will receive a plaque with a one-ounce gold coin. Planning is ongoing, as in past years, to present the 2020 awards at Columbus NASFiC 2000 (the annual North American Science Fiction Convention), still set (pandemic permitting) for Aug. 20-23 in Columbus, Ohio.

Here are the five Best Novel finalists, listed in alphabetical order by author:

* The Testaments, by Margaret Atwood (Random House: Nan A. Talese):  In this long-awaited sequel to The Handmaid’s Tale (a 1987 Prometheus Award finalist), oppressed women and others struggle valiantly for freedom. Some face mortal risks undermining the Gilead dictatorship, struggling with thorny moral complexities and working within the halls of power while taking covert steps to subvert tyranny. Poignantly and with sly humor, Atwood weaves three narrative threads exploring enduring questions about liberty, power, responsibility, and resistance. An “Underground Femaleroad” network (much like 19th-century libertarian Abolitionists) smuggles women into Canada while intelligence provided to the wider world’s free press promotes re-establishment of a free United States. Atwood references the "eternal verities" about "life, liberty, democracy, and the rights of the individual" that remain at the heart of libertarian ideals.

* Alliance Rising, by C.J. Cherryh and Jane S. Fancher (DAW):  Set in Cherryh's Alliance-Rising Universe (before her novel Downbelow Station),this interstellar saga of technological upheaval, intrigue and romance explores the early days of the Merchanter Alliance. Independent spaceship families ally during complex, multisided political-economic rivalries to defend established rights and promote the common good through free trade. In one of the better fictional treatments of a complex economy, characters maneuver to prevent statist regimes from dominating space lanes, resist Earth’s centralized governance, and investigate the mysterious purpose of a ship, The Rights of Man, undergoing construction on an isolated space station. Classic libertarian themes emerge about what rights are and where they come from (often to resolve conflicts), and how commerce and property rights promote peace and prosperity as humanity spreads among the stars.

* Ruin’s Wake, by Patrick Edwards (Titan Books):  This dystopian debut novel, set within a totalitarian world that emerged from catastrophe 500 years ago, weaves narrative threads from different sympathetic characters fighting for identity, love, and revenge amid repression. A young woman finds hope in an illicit love affair with a subversive rebel while trapped in an abusive marriage with a government official. An exiled old soldier searches desperately for his dying son, and a female scientist-archeologist discovers a mysterious technology that exposes the vulnerability of her world. A dictatorial government threatens their pursuit of happiness, knowledge, and family in a world recovering from ruin. This state has erased history and individual identity – a plausible scenario modeled by the author to evoke parallels to Stalinist Russia and today’s communist North Korea.

* Luna: Moon Rising, by Ian McDonald (TOR Books):  In the sequel to the Prometheus-nominated novels Luna: New Moon and Luna: Wolf Moon, McDonald dramatizes the struggle for independence and sovereignty as feuding lunar factions unite against a threat from Earth. The trilogy’s thrilling finale builds on McDonald’s intricate future of moon colonization, buoyed by somewhat free markets marred by violence, corporate espionage, and political marriages as the Five Dragons family dynasties control the main lunar industrial companies. Characters empowered by personal freedom and individual/social achievement in a society where contracts with others define people. Rendering a more positive view of a free society than earlier novels, McDonald offers justifications for freedom and markets while showing more negative aspects of politics and human behavior dealt with by people addressing inevitable problems in more voluntary ways.

* Ode to Defiance, by Marc Stiegler (LMBPN Publishing):  The forces of enlightenment, science, liberty, and truth battle factions of statism, bureaucracy, ignorance, superstition, and deception in this lighthearted, explicitly libertarian and occasionally satirical sci-fi/adventure novel, set in Stiegler’s BrainTrust Universe. To escape a United States impoverished by socialist bureaucracy, people live and work on innovative technology on a BrainTrust fleet of independent seastead ships. The story explores how a libertarian society can work and engage with rivals without violence and, ultimately, in peaceful co-existence (though some opponents receive the sharp end of the BrainTrust's characteristically pointed violence.) This world-encompassing sequel to Stiegler’s Prometheus-nominated Crescendo of Fire and Rhapsody for the Tempest explores bio-engineered diseases and biological warfare – especially timely during the ongoing global COVID-19 pandemic.

The Prometheus Awards, sponsored by the Libertarian Futurist Society (LFS), was established and first presented in 1979, making it one of the most enduring awards after the Nebula and Hugo awards, and one of the oldest fan-based awards currently in sf. All LFS members have the right to nominate eligible works for the Prometheus Awards. LFS members also nominated these 2019 works for this year’s Best Novel category: They Will Drown in Their Mother’s Tears, by Johannes Anyuru (Two Lines Press); Monster Hunter Guardian,  by Larry Correia and Sarah H. Hoyt (Baen Books); The Good Luck Girls, by Charlotte Nicole Davis  (TOR Teen); Empire of Lies, by Raymond Khoury (Forge Books/TOR); The Year of Jublio!, by Joseph T. Major (Amazon); Atlas Alone, by Emma Newman (ACE Books/Penguin Group); and Stealing Worlds, by Karl Schroeder (TOR Books).

The Prometheus Award have, for four decades, recognized outstanding works of science fiction and fantasy that dramatize the perennial conflict between Liberty and Power. Such works critique or satirize authoritarian trends, expose abuses of power by the institutionalized coercion of the State, and celebrate individual rights and freedoms and voluntary cooperation and free trade as the only moral and practical foundation for peace, prosperity, progress, justice, tolerance, mutual respect, universal human flourishing and civilization itself.

A 12-person judging committee selects the Prometheus Award finalists for Best Novel. Following the selection of finalists, all LFS upper-level members (Benefactors, Sponsors, and Full members) have the right to read and vote on the Best Novel finalist slate to choose the annual winner.

For a full list of past Prometheus Award winners in all categories, visit www.lfs.org. For reviews and commentary on these and other works of interest to the LFS, visit the Prometheus blog the link at the top of our website. Membership in the Libertarian Futurist Society is open to any science fiction fan interested in how fiction can promote an appreciation of the value of liberty.