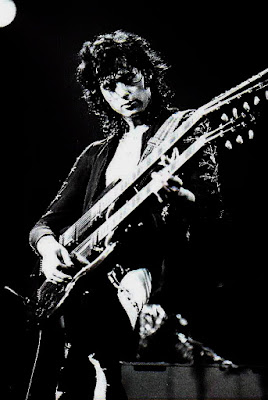 Oz Fritz has a post up on "Led Zeppelin & Crowley." The first couple of sentences:

"After The Beatles, Sergeant Pepper's Lonely Hearts Club Band album came out, Dr. Timothy Leary declared it the ultimate document to communicate his message, the message of self-directed, personal freedom of consciousness to grow and expand as it will.  Led Zeppelin plays that role for the maps and techniques of consciousness expansion presented by Aleister Crowley, i.e. his system of magick called Thelema.  Speaking from experience, one way to get Thelema deeply imprinted into your DNA and engrained into your body of habits is to listen to a lot of Zeppelin's music."

Here is a list by Dan Peeke, at Beginner Guitar HQ, of the "100 Best Guitar Albums of All Time." But I note with disapproval the omission of the Rolling Stones, the Allman Brothers and Cream.