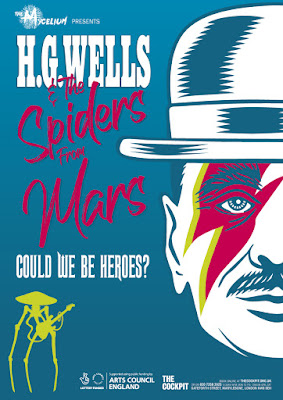 A work-in-progress of a new show, brought to you by The Mycelium: the people behind Cosmic Trigger, The Play!

We need YOU to help steer this show to its next phase. ALL feedback will be welcomed!
Geniuses collide when invisible muse ‘Ziggy’ crash lands into the Edwardian living room reality of the ‘Godfather of Science Fiction’ H.G. Wells, inspiring him to write his greatest works. But can H.G. surrender to his muse and help provoke an evolutionary leap in the collective imagination?

What can myth-making genius teach us about the urgent need to alter our cultural narrative?


COULD WE BE HEROES?

1st performance starts at 5.30pm, 2nd performance starts at 8pm. Bar open from 4:30pm
Please arrive at least 30 minutes before the show starts as latecomers might not be admitted.
Join the creative team for scene readings, interviews, artwork and workshopping followed by a 20 minute fully staged extract.

Also, please see this additional newsletter for more events and news.
on February 17, 2020