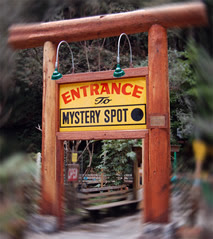 My wife and I went out to dinner last night. As we got out of the car in the very cold parking lot in the Cleveland suburb where we live, I noticed the car next to us had a bumper sticker touting the Mystery Spot in Santa Cruz, Calif. (I thought it might be a mystery bookstore and my wife loves mysteries and goes to such bookstores, but in fact it's a "gravitational anomaly" and local tourist attraction.

When we sat down in our booth and began studying the menu, the woman in the booth next to us asked for advice on what to order. In the course of the conversation, she revealed she was from Santa Cruz. There weren't that many cars in our area of the small strip mall parking lot, but it turned out she wasn't from the "Mystery Spot" car.

Don't you enjoy synchronities? I wanted to ask if she'd heard of Robert Anton Wilson, but my wife, wary of embarrassment, said "Please don't."
on February 29, 2020

Great post. Got a kick out of the conclusion 😂

RAW mentioned this Mystery Spot to me. I’m sorry I never went.