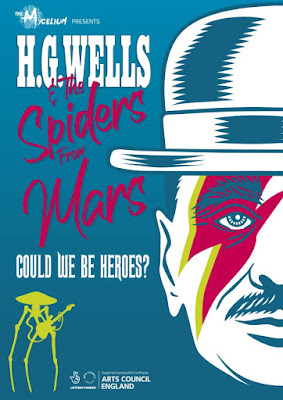 I love the title, don't you?

"I've written a play called 'H.G. Wells & the Spiders From Mars.' It's a one-man play (well, one visible man) and it stars Oliver Senton, who played Robert Anton Wilson in the Cosmic Trigger play. It's being directed by Daisy Campbell.

Geniuses collide when an invisible muse ‘Ziggy’ crash lands into the Edwardian living room reality of the ‘Godfather of Science Fiction’ H.G. Wells, inspiring him to write his greatest works: but can H.G. surrender to his muse and help provoke an evolutionary leap in the collective imagination? What can myth-making genius teach us about the urgent need to alter our cultural narrative. Could we be heroes?

"It's still in development, but it will be presented as a work-in-progress at the Cockpit Theatre on April 3rd. This will be partly fully staged and partly a readthrough, and I'll be doing a Q&A. More on this next time but for now, if you're likely to be around London on Friday April 3rd, keep the date free."