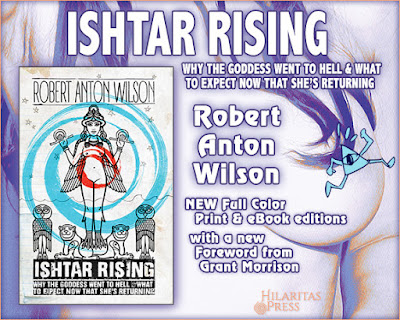 After a great deal of work, Hilaritas Press has released a new full color edition of Ishtar Rising, featuring a Grant Morrison introduction.

Some of the announcement from Rasa:

"We are really excited to present the new edition of Robert Anton Wilson's profoundly relevant treatise on the nature of Matrist vs. Patrist societies, Ishtar Rising: Why the Goddess Went to Hell and What to Expect Now That She’s Returning. RAW wrote extensively about his encyclopedic examinations of different aspects of the human condition, but he saw this one conflict as fundamental and far too often ignored by scholars. As even RAW admits, the first iteration of this book was originally a sneaky method of presenting a largely taboo topic to an unsuspecting audience. We offer our most loving and lasagna-filled gratitude to Grant Morrison for looking into that story and writing a spirited and timely new Foreword. Grant seemed especially suited to this project. We think you will really enjoy his essay!

"We also want to thank Greg Arnott and Chas Faris for their dedicated help in editing and proofing Ishtar Rising. As always, a mountain of thanks to our intrepid cover designer from amoeba, Scott McPherson. Scott didn't want any special recognition for this, but I can't resist noting that he designed a wonderful interpretation of Ishtar from the ancient Burney Relief, a Mesopotamian terra-cotta plaque, circa 1750-1800 BCE. He used that design for the cover of the new edition, but we couldn't resist making it a part of the book's interior design as well.

"RAW's daughter Christina values this book as one of her favorites from her dad, precisely because of the insightful exploration of that 'fundamental conflict' – the rise of the "Goddess" in a Patrist society (more on that below!). As part of our effort to make this an edition that RAW would have loved, she spent countless hours over the last months on this project."

Much more here, including a piece from Christina.

I’m looking forward to reading this republished rarity. Interesting to read Grant Morrison's foreword on Amazon but I couldn’t help but compare it to his recent comic book Multiversity (2016). There are 52 worlds in this mythology one of which seems to be a representation of our own world. There are no superheroes on our Earth-Prime but we’re told it has a 'powerful' influence on the 'progress and development' of the other 51 worlds.
In the 52 worlds of Multiversity 41 worlds have more males than females and 2 more females than males. At least that’s how they're portrayed visually over 52 pages and that's one hell of a ratio. Earth-Prime is portrayed as having a 50/50 ratio but this doesn't seem to be having much 'powerful' effect on GM's other worlds.
Perhaps GM's superheroes need to read Ishtar Rising as an antidote to all that patriarchal cartoon violence.
Iain Spence