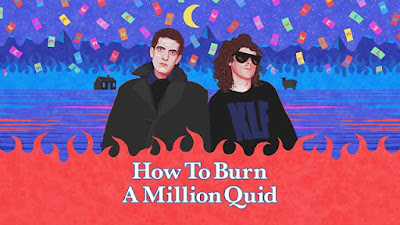 Daniel Thompson wrote to tell me about two new BBC podcasts that should interest many of you:

"'How to Burn a Million Quid' is a six part series that dramatizes the events surrounding the band KLF and the time they burned a million pounds cash in 1994. It seems to be produced by Ken Campbell, who did the stage play of Illuminatus. The band take the book as their inspiration so they consult it religiously throughout their career. There’s a scene that imagines RAW and Robert Shea at the Playboy offices when the inspiration for writing the good book strikes. Very funny and well produced audio drama.

"The second is an episode of the show “Seriously” called “The People’s Pyramid.”  It follows what the members of the KLF are up to 23 years after they burned the million. They are building a pyramid in Liverpool with bricks containing the cremated remains of 35000 people.  This show is a straightforward documentary with interviews on the street as the group celebrated the addition of more bricks in 2019 and search for a spot to build. It doesn’t have as many overt references to RAW or Illuminatus but the participants discuss some Discordian philosophy with the host and there’s a bit on the 23 enigma. It’s a quick 30 minutes and well worth a listen."

I had missed this, so I'm very grateful to Daniel for pointing these out to me. I've included links above, but you should also be able to download these to your phone from your favorite podcasting app. Try searching for "How to Burn a Million Quid" and "Seriously."

The late Ken Campbell is portrayed in the "Million Quid" series, but he's not actually the producer. Here are some of the credits: "Produced and directed by Boz Temple-Morris. Written by Sean Grundy and Cara Jennings. A HOLY MOUNTAIN production for BBC Radio 4."

I'll listen to these soon and report back.

Email ThisBlogThis!Share to TwitterShare to FacebookShare to Pinterest
Labels: BBC, The KLF