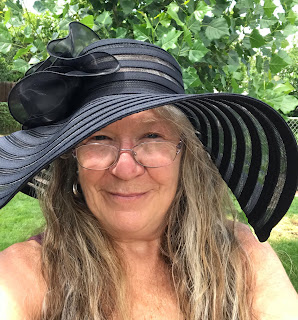 One of the highlights of the email communiques from Hilaritas Press are the pieces that Rasa usually coaxes out of Christina Pearson, RAW's daughter and the trustee of the Robert Anton Wilson Trust. The Ishtar Rising email announcement is no exception; you get to read Christina's vivid memoir of what it was like growing up in Chicago when Dad was an editor at Playboy magazine (she was in sixth grade or so and had 3-4 regular male friends:

One day one of the boys, Alan, needed to come in to the house to use our bathroom, and unbeknownst to me, had peeked into Bob and Arlen's bedroom. Where, GASP, he saw the huge collage of women's breasts made with magazine photos Bob had meticulously cut out and adorned one wall with. (He WAS writing The Book of the Breast, at the time you know...) Their bedroom was a large room, today we would probably call it a master bedroom although it did not have a bathroom of its own. My parents slept on a bare mattress on the floor at one end of the room, with one dresser, a couple of bookcases, a card table with Bob's typewriter on it, and a folding chair for him to sit on. The collage was the only thing decorating the whole wall. As far as young Alan was concerned, it was a MIRACLE!

One has to assume much of Illuminatus! was written at that card table.   Lots more at the link, including discussion of why Ishtar Rising is one of her favorites of her father's books. Buying a copy is on my "to do" list for today.

I got mine last night. So excited to dig in this weekend. Somehow, Ishtar is the one RAW book that never made it onto my radar. I knew very little about it until now. The subject matter is right up my alley, so all the more surprising I missed it.

Here's a little synchronistic note about my purchase. I got home last night and my first order of business was to confirm and pay for my attendance at a local vipassana silent meditation retreat. I did that, and my very next move was a visit to RAWIllumination - where I saw the exciting Ishtar news. As soon as I dug in, I saw Christina's note about having come off a vipassana retreat in India around the time she first read it. Very weird.

It would be nice if Ms Pearson’s essay made it into a future edition. Thanks once again to the amazing Hilaritas team: Ishtar Rising has just appeared in Blackwell’s Books over here in the UK. At last we can buy the book at a low price...Blackwell's is even undercutting Amazon’s price. Splendid.
Iain