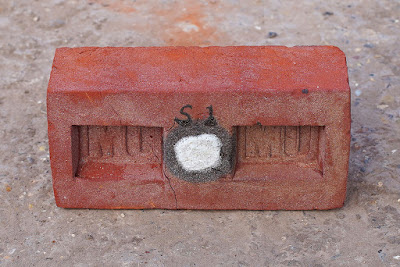 A fired brick of Mu.

In another chapter of "What the British Discordians are doing," you can go here to learn about the pyramid that is being built from the cremated remains of dead people.

"The Justified Ancients of Mu Mu are building a pyramid. The pyramid will be constructed of 34592 bricks. Each brick in the pyramid will contain the cremated remains of a dead person. This process is called MuMufication."

"MuMufication is the act of having a small portion of your cremated cremated remains fired in a Brickof Mu.

"MuMufied is what you will be after the act of MuMufication has been carried out.

"What you get in the here and now is a Brick of Mu and a signed and stamped Certificate of MuMufication.

"What you get after you die is 23 grams of yours cremated remains fired in your Brick of Mu, which will then be laid to rest on The People’s Pyramid come the following Toxteth Day of the Dead on 23rd of November."

I am still not quite getting this, but perhaps we can love the British without feeling fully confident  that we understand them. No doubt they feel the same way sometimes about Americans.