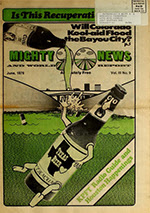 Martin Wagner uncovers another old RAW interview, "SMI²LE: An Interview with Robert Anton Wilson" by Howard Pearlstein. It's an interview focusing on RAW's techno-utopian predictions, which unfortunately haven't come about as closely as Wilson hoped. Sample:

Life is being extended all the time. The general life span has been rising sharply in the last hundred years, but the real breakthroughs will come when we begin to understand something about genetic engineering in a positive way. And if it’s possible, as many think, that the DNA triggers the death process, that the DNA-RNA dialogue contains certain signals which just turn on the program that begins the decline of the body and death by old age, learning how to reverse that would also necessarily lead immediately into learning how to create rejuvenation. It is quite possible that many people reading this will never die. That’s a really mind-blasting thought, but it’s a safe statement. I don’t say it’s going to happen, but it is possible.