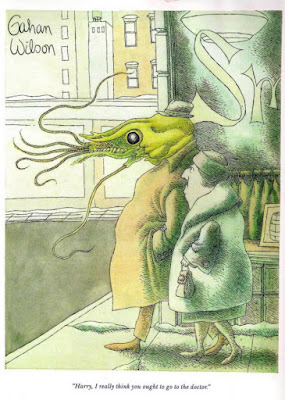 One of Wilson's big markets back in the day was "Playboy" magazine.

On Twitter, @advantardeodus pointed out that "Playboy" editors Robert Shea and Robert Anton Wilson must have known him.

I'm sure they must have at least known of him, if they didn't know him personally. And although I don't know, I would like to think they were fans.
on November 25, 2019

I believe Gahan Wilson had either a cartoon or text piece in every single published issue of Playboy, at least up to a certain point.

His work was a huge influence on my own forays into cartooning, at least in terms of the approach to humor. He could do fantastically intricate drawings of grotesque creatures or deceptively simple line drawings, but one could almost always immediately recognize a drawing as his work. One of the greats. RIP