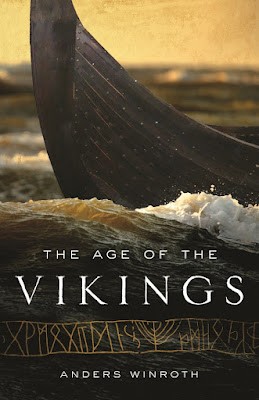 In many different places, Robert Anton Wilson references the Battle of Clontarf, usually depicted as an important Irish victory over Viking invaders, and that's how RAW always describes it, for example in this bit from The Widow's Son:

This was the symbol of the armies of Brian Kennedy of Borumu, who had driven the Vikings out of Ireland, and it would surely take another man like Brian Boru to drive out the accursed Saxons. Brian had started his war when he was eighteen, one year older than Seamus, in 944, and he had fought for seventy fooken years, not stopping until he was eighty-eight and the last Viking stronghold in Dublin was defeated on April 23, 1014. (From Chapter Six).

I have been recently gotten interested again in learning about the Vikings. I've watched some early episodes of the "Vikings" TV series, I recently listened to an audiobook of Neil Gaiman's Norse Mythology and a couple of days ago I finished The Age of the Vikings by Anders Winroth, a well-regarded 2014 history of the Vikings which is scholarly (it was put out by the Princeton University Press) but also intended for the general reader rather then specialists. Anders Winroth is a history professor at Yale and recipient of a MacArthur "genius" grant.

The treatment in The Age of the Vikings of the Battle of Clontarf was not what I expected after seeing numerous references to the battle from RAW.

Winroth writes that that battle is described in a twelfth-century work, Cogadh Gáedhel re Gallaibh "The War of the Irish Against the Foreigners," as a battle against foreign invaders described in one passage with 27 negative adjectives, such as "poisonous," "murderous," "piratical foreigners" "pagan" and so on.

Sitric, the "bad guy" in the story, the leader of the Vikings, was in fact a Christian who went on a pilgrimage to Rome in 1028 and asked the pope for an archbishop's see in Dublin. (Dublin was founded by Vikings).

Winroth writes that Irish fighters made up part of Sitric's army while Brian Boru's army included Vikings and points out that the Norse account of the battle says that Sitric won.

"What is certain is that the Irish were unable to expel Sitric from Dublin until he was finally driven out in 1036, after almost a half century of rule," Winroth writes.

Winroth also says that Sitric's expulsion "does not mark the end of Scandinavian rule over Dublin, which continued (by, among others, his nephew Ivar) until the invasion of Ireland by the Norman rulers of England in the twelfth century." (The Normans were themselves the descendants of Vikings).

Of course, everyone has their historical myths, and there are certainly revisionist accounts of the American Revolution. I am fairly certain, however, that the British actually lost.

It might amuse you to know of an alternative history of Ireland, put together by Bob Quinn. He, like Bucky Fuller, assumes that travel by sea formed a more important part of the spread of cultures, than travel over land. The Celts, or rather ‘Celtic Culture’ usually get described as reaching Ireland from the mainland of Europe, but Quinn’s theory implies that a common culture existed up and down the Atlantic seaboard, from Spain, to Brittany, Wales, Ireland, Scotland, and around to Norway, etc (hence the Viking influence). He traces traditions of music, and the strange unaccompanied singing of the West Coast, knitting patterns of the traditional sweaters, the style of boats, the position of buildings on the peninsulas, rather than in the bays, and all sorts of fascinating corroboration.

He wrote a book “The Atlantean Irish” with a lot more detail, and he also made some documentaries. I bought the full set from him years ago, but you can find episode one online.

Of course, he is considered a crank by many mainstream anthropologists and historians, clinging to their Celtic model (what Joyce called The Cultic Twalette). I don’t ask you to ‘believe’ anything he says.

Sorry, a typo in one of the links. Last sentence should read:

I am Irish and grew up during the 60's. At school we were taught the official Irish history (church and state sanctioned), the 'real history' of the fight against the oppressors,along with the mythological history of Finn McCool et al. Since then there has been an updating of all of these. For example unknown to many is the fact that Irish lesbians played a part in the 1916 Irish rising. I remember a history student telling me that there were rooms full of unread historical documents the content of which was unknown. So its understandable why there may be so many versions.