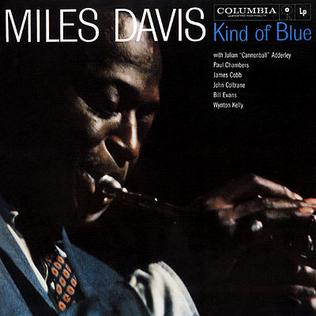 I have been listening to quite a bit of jazz lately, and to jazz's cousin, blues. Robert Anton Wilson loved jazz, but the music form doesn't seem to get much attention lately; maybe it's a good idea to toss out a couple of listening suggestions.

RAW's interest in jazz pops up all over the place, as in this 1980 interview, in response to a question about whether "ours is a cultureless society": "I also think jazz has proven to be a singular contribution to the world’s music. I think the Modern Jazz Quartet will some day be looked back at in the same way we look back at Vivaldi."

The album that's usually recommended as a starting place for jazz is Kind of Blue by Miles Davis, and indeed it's one of my favorite jazz albums. The album features an all-star lineup of Davis on trumpet, "Cannonball" Adderley on alto sax, John Coltrane on tenor sax, Bill Evans and Wynton Kelly on piano, Paul Chambers on bass and Jimmy Cobb on drums.

Listening to the album can lead to explorations of some of the featured musicians; it certainly got me interested in Miles Davis, who helped launch several directions in jazz, and Bill Evans, whose playing I particularly liked.  I have many Davis and Evans recordings. Many others become big John Coltrane fans; RAW mentions Coltrane in one of his "Jazz Haiku" in Coincidance.

Many of these guys unfortunately died young; Evans became a drug addict and died at age 51, Coltrane was only 40 when liver cancer killed him, Adderley had a cerebral hemorrhage at age 46. These are are terrible losses, but jazz musicians typically a prolific and all of the artists I mention made many recordings we can still listen to.

Other suggestions for jazz neophytes: The Cannonball Adderley Quartet in San Francisco, Getz/Gilberto and  Weather Report's Heavy Weather album. These are all popular albums.

I happen to particularly like jazz artists Dave Holland (known for Not for Nothin') Karrin Allyson and Ben Allison.  I also listen a lot to Dexter Gordon and Art Pepper. I like Duke Ellington a lot, too.

Eric Wagner is a big jazz fan and perhaps will offer a few listening suggestions in the comments; Eric is particularly an Art Ensemble of Chicago fan and recently wrote to me, "People in Sorrow seems to me the AEC’s masterpiece. I also love Nice Guys, the first of their albums I bought and still a favorite. I also love Ancient to the Future (Dreaming of the Masters, Volume 1) which includes covers of a variety of artists representing what they call “Great Black Music - Ancient to the Future”, including Bob Marley and Jimi Hendrix."

I consider Rafi Zabor’s The Bear Comes Home my favorite book on jazz and one of my favorite books period. I prefer the paperback edition which has a great “Listener’s Guide” at the end. I also love Ethan Iverson’s bog https://dothemath.typepad.com/ . Favorite albums: John Coltrane Crescent and A Love Supreme. Ornette Coleman Beauty Us a Rare Thing, Sonny Rollins Newk’s Time, Thelonious Monk Monk’s Music.

My Favorite Things by John Coltrane also seems an excellent introduction to Jazz. My recent enthusiasms for the past year include Miles' electric period particularly Live/Evil, Dark Magus, and of course, Bitches Brew. Don Cherry frequents my playlist of late. Sun Ra always rates highly for me. Perhaps the best jazz album I've ever worked on: Ask The Ages by Sonny Sharrock which also includes Elvin Jones, Pharoah Saunders and Charnett Moffett. Produced by Bill Laswell.

Man, I really liked Sonny Sharrock. What a style!

Mingus is my personal favorite, try Ah Um as an intro.

For something more recent, I like Medeski, Martin and Wood... try RADIOLARIANS III or one of their albums with John Scofield... Live: In Case The World Changes Its Mind

Along with many of the aforementioned artists Albert Ayler is a favorite of mine. Also a lot of jazzy stuff to be found in the old Mothers of Invention records as well as Frank Zappa's catalog in general.