Why was Historical Illuminatus supposed to end in 1824? 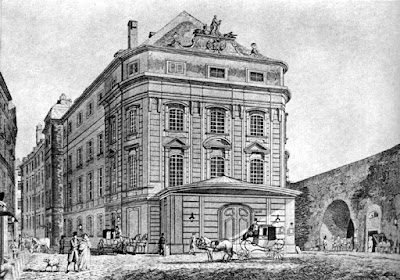 The Theater am Kärntnertor in 1830. It's in Vienna, and it's where the Ninth Symphony of Beethoven was first performed in 1824.

We are currently reading The Earth Will Shake, the first of the three Robert Anton Wilson "Historical Illuminatus" books, the others being The Widow's Son and Nature's God.

But in fact RAW had been planning to write four such books; The World Turned Upside Down was announced but never appeared.

I've wondered what was planned to end the series and recently reached out to RAW expert Michael Johnson,  who kindly shared his insights.

Michael notes that in a 1988 interview with David Banton, RAW discussed his plans:

RAW: The Earth Will Shake, and The Widow’s Son.

DAB: Aren’t those two books part of a trilogy, too?

RAW: No, that’s part of a pentology.

DAB: And so far two of them have come out.

RAW: That’s right. I’m working on the third, which is called Nature’s God.

DAB: And what is the basic concept behind that series of books?

RAW: Well, that series deals with European, and to some extent, American history, between 1764 and 1824. That was a period in which all the rules changed, everything, the whole Western world went through a total change. We went from feudal, agricultural monarchy to capitalist democracy and industrialism. Everything changed, the style of music changed, we went from Baroque to Romantic, everything changed. Philosophy changed, it was in that period that David Hume’s books appeared, knocking the bottom out of all previous philosophy. Adam Smith’s Wealth of Nations appeared there, the Declaration of Independence, of course. I’m taking that as a model to show how revolutions work. They work on many levels besides violent revolutions, there are non-violent revolutions, but they’re all tied together. We’re going through a period like that right now, and what got my started writing those novels was to give an example of a previous period that was as revolutionary as the period we’re living through; to show some of the general laws of what happens when society goes through rapid transition. We’re going through a dozen revolutions at once right now, too.

Michael also noted that plans for The World Turned Upside Down were briefly discussed in this interview.

But one fact jumps out at me: That was the year when Beethoven's Ninth Symphony was completed and first performed. Considering the role music plays in the other books, Beethoven's ties to the Illuminati, etc., that is a speculation that make sense to me -- although, as I said, I don't know.
on April 20, 2019

Yes, exactly. During one of my last visits with Bob, he said book 5 would have ended with the crashing debut of Beethoven's 9th Sigismundo and young Wolfgang in the audience.

Interview was interesting... clearly the location in California that they couldn’t make out was Esalen. I met RAW there in ‘92... strange as this sounds, he told me that the next Historical Illuminati book would have time traveling ants, or ants from the fourth dimension. Unless I dreamed that. The world never got those ants.

Cool. Where did that appear?

It appeared in Disco 2000 edited by Sarah Champion.

Can you give a synopsis of the story? Is it worth time and money to track down a copy of the anthology?