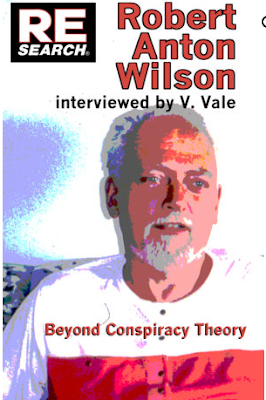 RE/Search Publications ("your one stop shop for GENUINELY alternative media") has announced the impending publication of Robert Anton Wilson: Beyond Conspiracy Theory, available for $20 for pre-order, here are the relevant details:

The core of the book is a lengthy 1985 interview, where common and pernicious errors in language are examined in detail, along with a discussion of Wilson’s favorite writers (such as William S. Burroughs and Philip K. Dick) and a critique of occultist Aleister Crowley. He humorously illuminates how to use your brain “better,” and how to be agnostic about all ideas.

Included is a list of fifty book recommendations from his library, letters, a list of lecture topics (funny!) and more. RE/Search finally presents this lost interview—and its publication couldn’t be more timely. With the election of Donald Trump, conspiracy theory and “fake news” has become mainstream—and Robert Anton Wilson seemed to have prophesied it all.