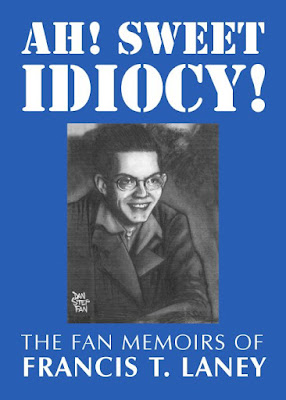 In one of his comments in the latest episode of the book discussion group, Oz Fritz points to a few sentences on Page 124 that talk abut coincidences. Abraham Orfali tells Sigismundo to pay attention to them and tells the youth, "they are a link between all individual minds." Sigismundo doesn't understand Orfali but begins paying attention to coincidences.

I don't understand coincidences (or "synchronicities") very well, either, but I enjoy them. Here are two I ran into recently:

1. I subscribe to a science fiction/fannish newsletter from David Langford, the British fan and author, called "Ansible," available here.  It's a great resource if you want to keep up with the SF world but are pressed for time and lots of time to fandom.

In the latest issue, Langford writes, "Francis T. Laney’s infamous 1948 fan memoir and polemic Ah! Sweet Idiocy! is the latest addition to the free ebooks list at the TAFF site: see taff.org.uk/ebooks.php?x=ASI for details and other material included." (There are lots of free ebooks of famous fannish writers there; Mr. Langford hopes you'll make a donation to the Trans Atlantic Fan Fund.)

I followed the link and downloaded a copy of the Laney book; I intend to read it soon. I've run across mentions of Laney's diatribe over the years, but I'm sure I haven't seen anything about it for years.

About a day after I downloaded the ebook, I got an email from an old friend, Richard Newsome, talking about fandom. "Maybe every generation of fans thinks its fandom is the last dregs; Towner Laney certainly thought so in the late 1940s. Have you ever read Ah! Sweet Idiocy! ?" Richard wanted to know.

As soon as I bought it, I went through it. As promised, most were movies that I've never seen, but I was reassured to see that it recommended a few movies that I had seen and liked, such as Dead Again, Zardoz, 2010 and Zelig. I actually saw Zardoz when I was in high school. I'm not sure I've seen it since then, or even thought about it much.

After I finished looking at Apel's movie book, I resumed reading the new Robert Anton Wilson book, Beyond Chaos and Beyond, and I came to the part where Apel talks about watching movies with RAW, in the "Introduction" to the "At the Movies with Robert Anton Wilson" section: "I experienced some notable failed attempts to introduce Bob to some of my own favorite films .... [RAW didn't like, for example, Austin Powers: International Man of Mystery] And let's not even mention Zardoz, writer/director John Boorman's brilliant 1974 sci-fi satire."

OK, Apel likes the film so it's not too surprising he talks about it in different places, but what are the chances that RAW hated a movie I probably haven't seen since the 1970s?

I frequently used Zardoz for an avatar name in the late 90's and 2000's - to sell stuff on eBay, post on lashtal.com (Crowley forum) etc. I think I may have used it on the MLA forum as well. I loved the film.