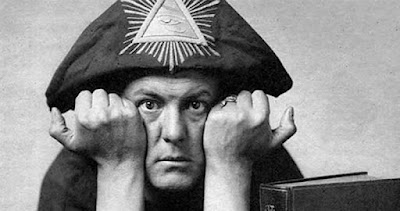 At his blog, Oz Fritz reviews 93 The Aleister Crowley Primer by J. Edward and Erica M. Cornelius, and recommends it. Excerpt:

The 93 Primer has something for anyone with an interest in Thelema.  It can become an invaluable aid to those with little or no prior exposure to Thelemic philosophy.   It can do the same for anyone with experience ranging from moderate to extensive.  The potential for unlocking new keys, for pursuing new avenues of research in Thelemic study and practice seems just as unlimited and vast as unlocking new keys and gaining new insights to the human mind and nervous system.  This book rewards repeated rereading.

The book apparently is not currently available on Amazon, but here is a page for ordering.

After I saw Oz' post, I wrote to him, noting that there's a fair amount of material about Crowley in Beyond Chaos and Beyond, the new RAW book. For example, there's a passage where RAW compares Crowley to Philip K. Dick as mystical writers, remarking, "they both fascinate me because they don't settle on any one explanation." Scott Apel then remarks, in a note, that Lawrence Sutin, who wrote an important Dick biography, Divine Invasions, also wrote a biography of Crowley, Do What Thou Wilt: A Life of Aleister Crowley. A search on Oz' blog for Sutin's name didn't turn up any mention, so I wondered if Oz had read it.

Oz wrote back, "I greatly enjoyed both of Sutin's bios.  The Crowley one was the first real comprehensive one that wasn't biased against him.  I recommend it highly.  Since then, two other excellent Crowley bios have been published by Richard Kaczynsky and Tobias Churton.  Sutin isn't mentioned in my blog because I read both his bios awhile before I began the blog and the books I do write about tend to be from my current reading."

Thanks for posting this Tom and for providing a link to purchase this book, something I forgot to do. It's a limited edition of 200 copies and is signed by the authors. Maybe that's why it's not at Amazon.