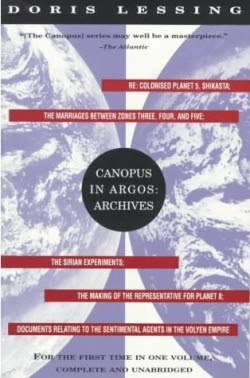 Robert Anton Wilson interviewed famed British novelist Doris Lessing for the December 1983 issue of New Age Journal. Lessing won the Nobel Prize for Literature in 2007. You can read the interview here.  (Update: The PDF has two different dates; January 1984 may be correct.)

Wilson writes, "When I left, I felt as I have very few times in my life -- when interviewing Bucky Fuller or certain physicists -- that I had encountered not just high intelligence but real genius."

There's a certain asymmetry to the conversation -- Wilson has read many of Lessing's books and admires her writing a great deal; Lessing shows no signs that she realizes Wilson himself is the author of dozens of books. Wilson was not really a famous writer whose name would automatically be known to Lessing, but still ....

The interview was acquired by Adam Ormes, who gave me permission to make it available here. Thanks also to Ted Hand for connecting me to Adam.

"Having read Valis, The Cosmic Trigger, and Lessing's Canopus in Argus, I was intrigued by Bob's reference to his interview with Lessing in the introduction to The Cosmic Trigger. Having determined that it was nowhere to be found online, I then set about trying to work out which 'New Age magazine' he had meant. After deducing that he must have meant 'New Age Journal', as my searches had revealed the only 'New Age Magazine' in publication at that time to be a strictly masonic publication, I managed to track down its onetime editor, Peggy Taylor, who told me that the back issues were stored in her 'very full garage' and that at some point she would have a look for me. This was at the end of 2010. Alas the matter was complicated by it being a long snowy winter, Peggy's busy work schedule and frequent travels away from home, and my complete ignorance of when it'd been published. Then in late summer of 2018 I came upon a reference to the piece in an online biography of Lessing with the all-important issue number. This evidently made the prospect of looking for it far less daunting for Peggy, who then managed to find the relevant issue, graciously scanned the pages for me and sent them over."

Wonderful interview. A great find. Ive never read any Doris Lessing but will now explore. Thanks