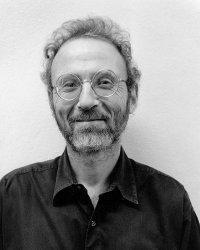 Sy Safransky, editor and founder of The Sun Magazine.

Thanks to a tip from our Austrian bureau chief, Martin Wagner, I've read "Dreams Without End: An Interview With Robert Anton Wilson" by Sy Safransky, published in 1987 in The Sun Magazine, based in Chapel Hill, N.C., (and the boss, Mr. Safransky, is still there.)

Safransky doesn't agree with all of Wilson's ideas, but the pushback at times make the interview more interesting. (Wilson, although generally more or less "left," doesn't embrace all current wisdom. Some things never change.) Here is one good bit:

WILSON: Mumford talks about infantile fantasies; I think he’s being childish. It’s not an infantile fantasy to think of getting solar energy from outer space to solve the energy problems of this planet. It may or may not be the best solution. That can be argued on a level of practical things — how much do you get with the dollars you put into it, how long will it take to get the return, is it better than solar power collectors on the planet? Those are practical things about which we can disagree. But the idea of getting a lot of solar energy on a planet which is running out of fossil fuels is not an infantile fantasy. Mumford just hasn’t thought about the idea. He’s had a conditioned reaction. It’s outside his reality, so he wants to banish it, like a Marxist says “bourgeois” when he wants to banish a thought, and a fundamentalist says “satanic.” There’s nothing infantile about the idea of a new frontier. The opening of the Americas to Europe, whatever tragedy it was for the native Americans, unleashed tremendous creative energies which had a feedback effect in Europe. They probably never would have had democracy in France and England if the New World hadn’t opened up and the U.S. hadn’t created an arena in which new, utopian social ideas could be tried out. It’s how we got the Bill of Rights and everything that’s good about this country. And that fed back to Europe. And I think space colonization will feed back radical ideas to the earth in the same way. I don’t think that’s an infantile fantasy.

SUN: Ken Kesey said, “A lot of people want to get into space who never got into the earth.”

WILSON: That’s probably true. A lot of people do things for the wrong reasons. But how far do you have to get into the earth to satisfy Kesey? I was a farmer for two years in Ohio and one year in northern California. Does Kesey say I’ve got to go back and do three more years of farming before I have the right to support space colonies? Fuck you, Kesey! I don’t tell him what he should do. He can stay on his bloody farm in Oregon. I’m not trying to drag him into space.

Blogger's note: On the subject of "infantile fantasies," Dr. Geoffrey Landis, a NASA scientist and science fiction writer who lives in Berea, Ohio, where I live, has proposed a scheme for obtaining solar power from outer space. Landis was part of the team responsible for the Mars rovers, holds nine patents mostly in solar cells, etc.