War on some drugs notes 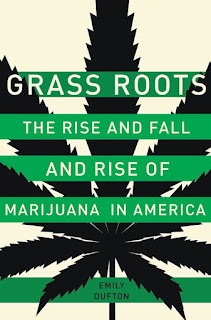 I've gotten interested in the marijuana legalization movement (as I mentioned earlier, Michigan has legalization on the ballot this fall), so I thought I'd share some recent articles and sources of information I've run across.

I've started listening to a weekly podcast, Marijuana Today, which covers the movement coast to coast. They are generally quite good, although last week's episode, an interview with Massachusetts pot commissioner Shaleen Title, should have pressed her a bit harder on her state's delays in getting legalization carried out. I've linked to the website, but you should be able to snag it using your favorite podcasting app.

Mike Riggs apparently is Reason magazine's "pot correspondent," and a couple of his articles caught my eye. "I Have a Cannabis Problem. I Still Think It Should Be Legalized" is an interesting opinion piece. "How to Legally Buy Weed In D.C. Without Actually Buying Any Weed at All" explains Washington, D.C.'s oddball marijuana rules, where the substance is legal but can't be legally sold.

Finally, I have just finished listening to an audiobook version of Emily Dufton's recent book, Grass Roots: The Rise and Fall and Rise of Marijuana in America. As the title suggests, it discusses the decriminalization movement in the 1970s, the backlash led by parent groups and Nancy Reagan in the late 1970s and 1980s, and the ongoing legalization wave. Dufton's book is scholarly, lively and evenhanded and I recommend it if you want to know more about the politics of the issue.
on September 14, 2018