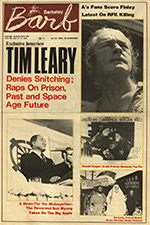 Another great find by Martin Wagner: An interview by Robert Anton Wilson of Timothy Leary, "Leary trades Drugs for Space Colonies." To RAW's credit, he presses Leary on the accusations that he was a "snitch," but there's lots of Leary techno-optimism, too. Sample:

Wilson: In your unpublished book, The Game of Life, you say that we can learn more from science-fiction than from the Buddhist and Hindu scriptures. Were you serious when you wrote that, or just being provocative?

Leary: I’m always being provocative. To provoke new thoughts in one’s contemporaries is elementary evolutionary courtesy. The Oriental forms of brain science are historically very important and certainly nobody who wants to understand the nervous system can avoid a basic study of those traditions. I spent nearly a decade mastering them. But to me, and to those who have kept moving, those traditions are outmoded now. I want to personally apologize to anyone who has been led into the Hindu trap because at one time I was using that model. My whole philosophy is based on metamorphoses, which is the law of evolution. We should all keep moving from rock to rock, from habitat to habitat, from model to model, from planet to planet. The fact that we were once using Oriental models to describe higher brain function doesn’t mean we have to be stuck on that rock forever. The search for a Perfect Master is only recommended if your goal is to become a Perfect Slave. Sci-fi has much more exciting models than anything in the Vedas.

I needed this right now. Especially the part about politics. I have felt way to caught up in current political going-ons. Time to focus on the stars again.