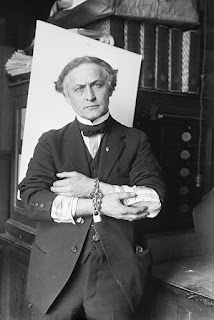 Harry Houdini in handcuffs in 1918.

If you are reading this blog, you  probably know that H.P Lovecraft influenced Robert Anton Wilson. You may not know that there was a connection between Lovecraft and escape artist Harry Houdini. I certainly didn't.

From the Guardian: "A long-lost manuscript by HP Lovecraft, an investigation of superstition through the ages that the author was commissioned to write by Harry Houdini, has been found in a collection of magic memorabilia.

"The Cancer of Superstition was previously known only in outline and through its first chapter. Houdini had asked Lovecraft in 1926 to ghostwrite the treatise exploring superstition, but the magician’s death later that year halted the project, as his wife did not wish to pursue it." 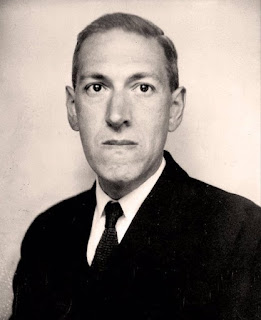 The Guardian article says that Lovecraft and Houdini shared a common interest in combating that they saw as superstitious beliefs. Read more of the Guardian's article.

Ted remarks, "Houdini deserves a lot more attention as a central Bob Wilson concern. Bob is following in his footsteps and using magic as a metaphor for the manipulation of reality."

"Houdini is a big deal in the Schrodinger's cat trilogy," he notes. Ted sent me a passage to illustrate and remarked, "Breaking out of the trap of (dogmatism) being one of the central RAW concerns."