John Clute on Wilson and Shea 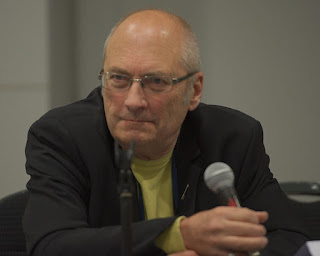 John Clute at the London Worldcon in 2014. (Creative Commons photo)

Once of science fiction's best book critics is John Clute. I'm reading one of his collections of reviews now, Scores.

Clute wrote many of the entries for the wonderful Encyclopedia of Science Fiction. The third edition is online, available for free, and one of the glories of the Internet.

And as Charles Faris recently pointed out to me in an email, the entries on Robert Anton Wilson and on Robert Shea are both written by Clute and are well worth reading.

A couple of sentences from Clute's Wilson piece: "It might be thought that Wilson, like many writers of his generation, would slip into Virtual-Reality venues when attempting to manipulate levels of perception; but ultimately he refused to supply comforts of that ilk, for in his work there is no centre to the labyrinth, no master waiting to reward the heroes of the quest. Most of Wilson's later work was nonfiction, and addresses with a packrat omnivorousness the splendours and miseries of the Western mind, always with the clear intention of fomenting autonomous thoughts in his readers."

The Robert Shea entry doesn't mention All Things Are Light; I wrote an email to Clute pointing that out but got no reply.