Tor.com on a libertarian SF novel 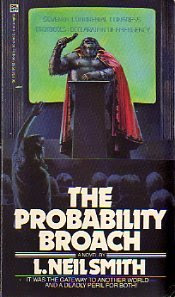 Cover of the first edition of The Probability Broach.

I've read several books by Smith, and it's pretty obvious he's heavily influenced by the Illuminatus! trilogy. I have not yet read The Probability Broach, which is often considered his best. The book won the Prometheus Award in 1982.

The Tor.com article by SF fan Alan Brown is part of a series on "classic science fiction and fantasy books."

The Probability Broach was his first novel, published by Del Rey books in 1980. The book takes its main character, a police detective named Win Bear, out of a dystopia with an oppressive government and thrusts him into an exciting alternate world that has very nearly dispensed with government altogether. Smith’s writing voice is witty, snarky, and entertaining, and there is always plenty of action to keep the story moving.

The book is available in various editions, and also as a graphic novel.
on September 28, 2018