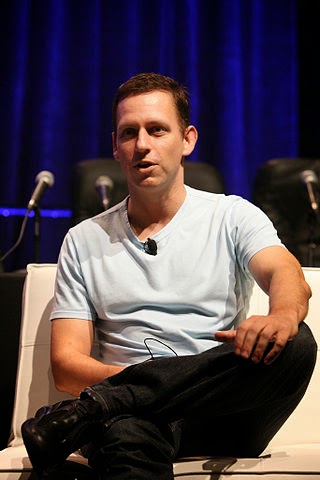 
I've remarked before about Peter Thiel's interest in making real many of the causes and ideas that Robert Anton Wilson was interested in. As I wrote in 2011,

So if there were a weird rich person who wanted to give away money to advance RAW's causes, it seems to me he would give money to aid space migration, improve human intelligence, extend human lifespans and support libertarian causes, at least in the broad sense of supporting civil liberties, something RAW advocated all his life even as some of his political perspectives shifted.

Believe it or not, there is such a person — venture capitalist Peter Thiel. (If you've seen the movie "The Social Network," he shows up as one of the characters, the first big investor in Facebook.)

Thiel's foundation funds research into combating aging and also funds the Singularity Institute for Artificial Intelligence. Thiel has invested in SpaceX, the most important private space exploration company, and has given money to The Human Rights Foundation and the Committee to Protect Journalists. His foundation site also notes investments in antiviolence causes.

Tyler Cowen recently publicly interviewed Thiel. You can read the transcript or download or watch the podcast.

I liked the bit where Thiel talked about learning to think for himself:

PETER THIEL: I learned that I was incredibly prone to this problem of social convention. If you want to give it a religious terminology, the psychological terminology would be that I had a rolling quarter life crisis in my mid-20s. The religious terminology, I had a quasi-conversion experience where I realized the value system was deeply corrupt and needed to be questioned.

I do think that one of the ways of challenging convention, one way, the Asperger’s way, is just to be vaguely oblivious to it all, and continue apace. Then I think there is another modality where you just become aware of how conventional our conventions really are, and then that becomes sort of an indirect route of trying to start thinking for yourself.