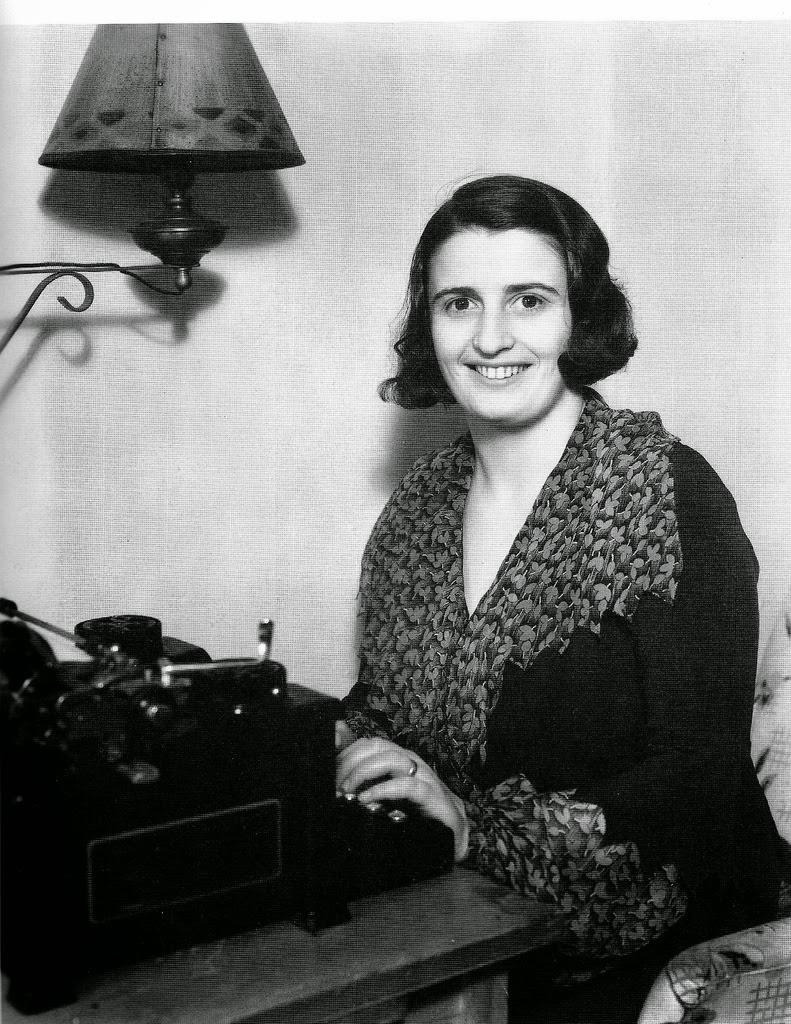 (This week: "I finally got around to reading Telemachus Squeezed," page 537, to page 545, "No remission without the blood of our Saviour and Lord Jesus Christ.")

Simon Moon reads Telemachus Sneezed and so we get a long satire of Ayn Rand and her Atlas Shrugged, reimagined as a rather more conventional right winger named Atlanta Hope.

Many American libertarians were turned on to the political philosophy either by Ayn Rand or by Illuminatus!,  so in making fun of Rand, Wilson and Shea also are acknowledging their debt to her as an example of someone who used fiction to get across a political philosophy.  See John Higgs' well-known (and very amusing) "Illuminatus! vs. Atlas Shrugged" piece.

Jesse Walker remarked upon the influence Rand and Illuminatus! when I interviewed him in 2011:

I don't want to make any facile assumptions about your politics, but you seem to lean libertarian on at least some issues. How did you get interested in libertarianism, and did ILLUMINATUS! play any role in shaping your political philosophy?

WALKER: My parents are liberal Democrats, and I adopted their politics as a kid, moving further to the left as I entered my teens. In practice, this meant I was strongly opposed to censorship, to draft registration, to U.S. intervention overseas, to mixing church and state, to bigotry, and to concentrated power -- all positions that I still hold today. Becoming a libertarian was largely a matter of reading free-market economists and getting convinced that their arguments were stronger than the economic views I had absorbed rather haphazardly before then.

Like Jesse, I never was a Randian (I've never read any of her novels), but most of my libertarian friends in college were big into Rand AND Illuminatus! and there are many libertarians heavily influenced by both (e.g., libertarian science fiction writer L. Neil Smith, who peppers his novels with references to Illuminatus! and who features a thinly-disguised Rand as a character in at least one of them.)

"Lothar" "Diet of Worms," page 537, references to Martin Luther, founder of the Protestantism that is the backbone of much of U.S. conservatism. Republican politicians from the South and their supporters are often Southern Baptists, Assembly of God, etc.

Taffy's rapes, page 539. I'm told that in Atlas Shrugged, Dagny Taggart submits to forced sex. The Randians I knew in college seemed to worry a lot about those scenes (described here.)

"Discussing Heracleitus," Greek philosopher. Rand claimed to have derived her philosophy from Aristotle. Perhaps the satire is the difficulty in deriving an ideology from a rather difficult and dark philosopher. 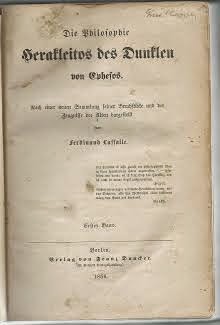 From the library of John Merritt. He says "The title page of volume 1 of a 2 volume, 879 page Hegelian socialist commentary on Heraclitus. "The Philosophie of Heraklitos, the dark/obscure one of Ephesus, according to a new collection of his fragments and evidence of the Ancients."
Wikipedia article on the author. For the morbidly curious, volume 1, volume 2. The things you find at academic garage sales." 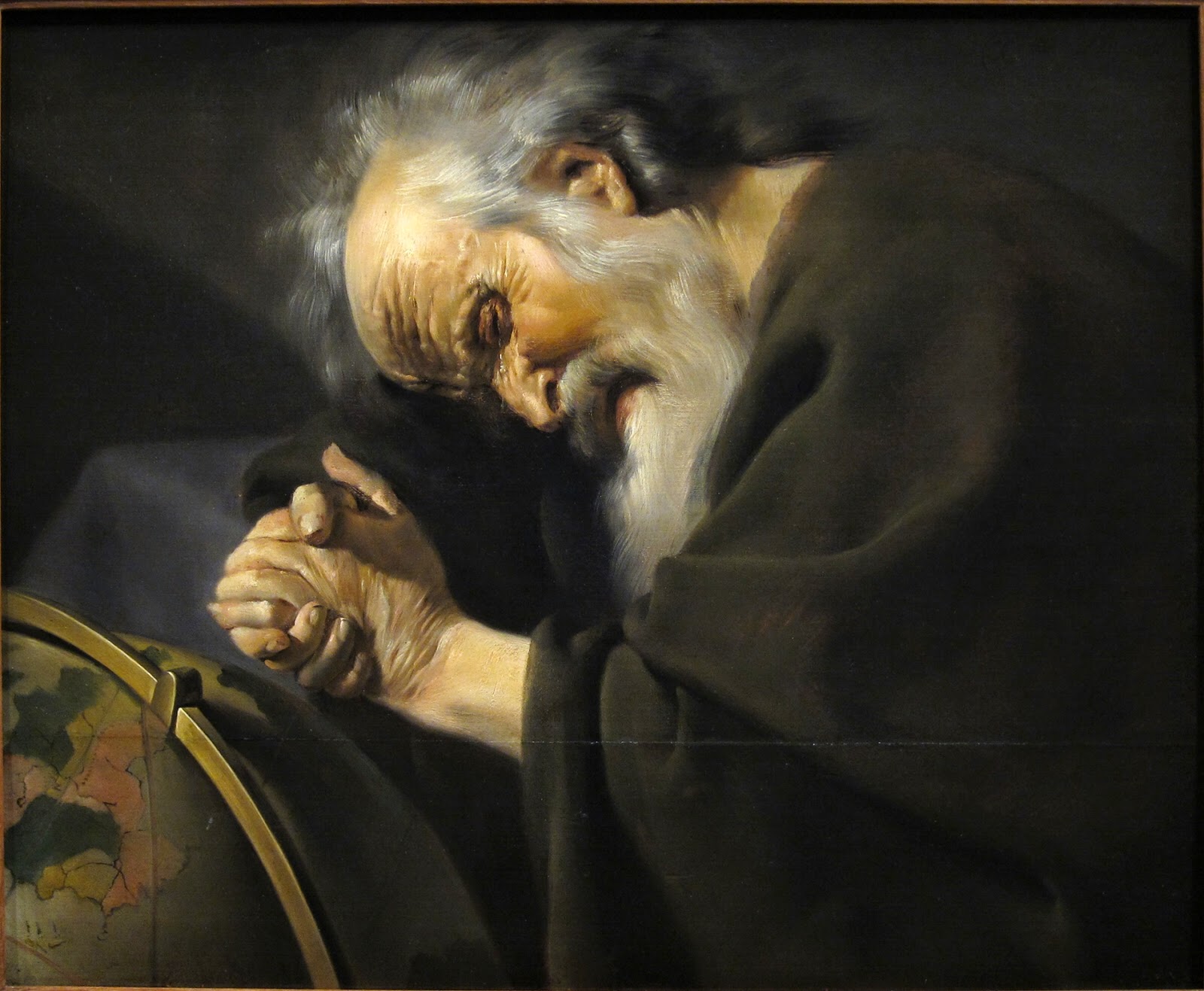 Heraclitus by Johannes Moreelse, shown as the "weeping philosopher."

"His name is Captain Clark," page 541. As I mentioned in an earlier entry to this chronicle, the "Captain Clark" supposedly mentioned by William Burroughs is rather difficult to locate.

"Howard Cork," page 542, playing on Rand's Howard Roark, protagonist of The Fountainhead, but also on Hagbard Celine and never trusting anyone with the initials "H. C."

"twenty-four real men and women were dead," page 545. Celine originally had planned never to kill another human being, page 506.

Just an honest question for those of you who've read Illuminatus! more times than I have.
Does the word "libertarian" appear anywhere in
the novel(s)? About how many times? Where? How about "anarchy"/"anarchist"/"anarchism"?

BTW, there ought to be a Skeleton Key to the Illuminatus! Trilogy in print or online somewhere but there isn't...is there?

This interesting question is worth an entire blog post (and will get one soon) but briefly: I ran a search in an electronic text and the word "libertarian" appears 13 times, not just in the appendix but in various places in the novels (it was not a well-known term when Illuminatus was written, 1969-1971); "anarchist" or "anarchists" appear 41 times in the text; the folks name-checked in the text include Lysander Spooner, Ayn Rand and Benjamin Tucker.

Actually, "libertarian" started being used at the end of the 19th century after "anarchist" was slimed by bomb-throwing terrorists and state provocateurs.

So, yes, the term has been around, but not used much as there really wasn't any "libertarian" political movement. The "anarchists" were busted on real or trumped up charges, and the only other political faction was the soviet-style Communists, never to be confused with any kind of "libertarians".

More next week--I hope--when we get to Hagbard's shpiel on privilege.

P.543: 'Meanwhile, the Gateless Gate...and I compute'
I really like to meditate on the moments at which the narrative transitions from different perspectives. Here we get a vista into what is doing the transition. The literal 'Ghost in the Machine'. Along these lines, in a few more weeks we shall have what I consider to be the 'Mindfuck' crescendo of the text...

Following Beowulf's comments, I have been doing archival work on 20th century anti-authoritarianism in NYC, and one of the most important anarchist organizations (founded in 1946, as far as anyone can remember) is the Libertarian Book Club. In the 1980s a lot of the newer member were pushing to get the name changed to the 'Anarchist Forum' so as to avoid being confused with being 'Randoids'. They ended up keeping the name and adding the new one.
http://www.morc.info/MORC_LBC.html

I read Atlas Shrugged and Fountainhead when in High School. Thought they had some good ideas, but didn't care so much for Rand's writing. Sometimes her excessively overwrought, often inclement, occasionally clement viscous verbosity opaquely obscurated the arborescent schema (to borrow a term from my latest fav philosphers Deleuze and Guttari)intended.

I read Illuminatus! a few years later and found it much funnier. It appears much more of a rhizome. ( D & G again).

Along with fyrefly, the political philospophy in Illuminatus! doesn't appear that obvious to me. More examples from the text might be helpful. Crowley also writes and highly endorses personal Liberty in his philosophy, but I'm not aware of his ideology having much influence on Libertarians of any stripe. I could be wrong.

At OZ Fritz: There was a recent brewhaha over a book on Crowley written by a famous 'nationalist anarchist'