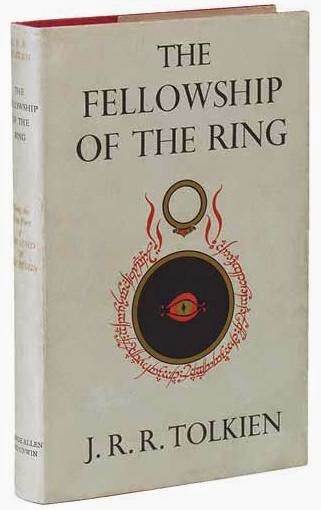 Cover of the 1954 first edition of The Fellowship of the Ring, the first book in the Lord of the Rings trilogy, which tells the story mentioned by Mama Sutra: "a great hero named Phroto who battled a monster named Zaurn."

Alternatively, the reader can accept her version of events and reject the one that's presented in most of the book.

" ... but think of them that way for awhile," page 523. A clever way of explaining Lovecraft's otherworldly creatures, and a clear explanation of how the Cthulhu Mythos fits with the plot of the book. There's a lot of discussion of the Cthulhu Mythos among Lovecraft devotees, but I think Illuminatus! is perhaps undervalued. It has a very clever adaptation of Lovecraft's world.

Page 531, Mama Sutra's chronology manages to take in much of the great corpus of fantasy in the 20th century -- The Lord of the Rings ("Phroto" for Frodo and "Zaurn" for Sauron), Robert Howard's Conan and Robert  W. Chambers' The King  in Yellow. 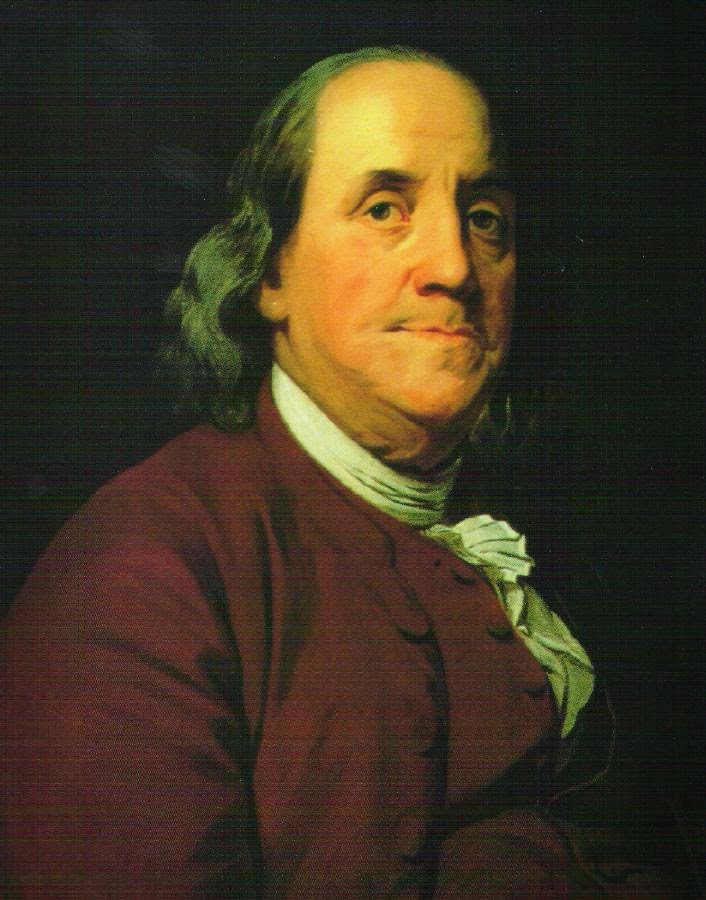 "Jefferson and Franklin," page 533, Illuminati heroes according to Mama  Sutra's scheme, as they both stood for science. Franklin, with his famous experiment with the kite and lightning, demonstrated that lightning is a natural phenomena.

"Nature and Nature's God," page 534. From the first sentence of the Declaration of Independence: "When in the Course of human events, it becomes necessary for one people to dissolve the political bands which have connected them with another, and to assume among the powers of the earth, the separate and equal station to which the Laws of Nature and of Nature's God entitle them, a decent respect to the opinions of mankind requires that they should declare the causes which impel them to the separation." In connection with this, I found a paper that describes Jefferson as a "Deist" and "freethinker." Of course, Nature's God is the title of the last novel RAW published in his "Historical Illuminatus" series.

Yesterday, after I published the obituary notice for Brian Shields, I dutifully read the section of Illuminatus! for today's blog post. I came across, on page 529, "I studied much. I have a Shield. I cannot explain the Shield any more than I can explain my ESP. I only know that it works."

If you haven't seen it already, I wanted to point out that Michael Johnson posted a long tribute to Brian Shields, in the comments, in Sunday's blog post, some hours after the original post. Here is a bit from what Michael wrote: "His propensity to pun was Pavlovian. I'd say he'd average 30 puns per hour of yack. You had already groaned too many times; eventually you quickly point and say ha! and go on with what you were saying. But he had a theory of puns: that they were endless reminders that Things Connect In Mysterious Ways."

Incidentally, I was not trying to be a smart aleck by beginning today's section with "I'll give it to  you raw" on page 523. These discussions are about 10 pages apiece, but I try to break these up into logical segments, so some sections are a little more than 10 pages, and  some a little less. When I looked at the text, it seemed like the natural way to begin this week's discussion, as it was the beginning of a long section of Mama Sutra's version of the Illuminati story. I didn't notice the "raw" pun until this weekend.

Yesterday, another "things connect," I sent out a link to the Brian Shields obit to my 523 followers on Twitter (as I write this, it is still 523, although of course that will soon change.)

(Next week: "I finally got around to reading Telemachus Squeezed," page 537, to page 545, "No remission without the blood of our Saviour and Lord Jesus Christ.")

The Illuminati in Mama Sutra's story are like those RAW calls fundamentalist materialists: all the good things science does for us and all the fear of what science can't explain.

Good catch on the Shield/Shields synchronicity, I missed it. A major RAW supporter, Brian Shields dies and his name turns up in the next Illuminiatus! reading. Imo, this affirms something quite real and shows the potency of this book. RAW publicly stated, and it appears obvious from the chapter and appendix titles that Illuminatus! functions on one strata as a guide to Qabala. A guide to Qabala = a guide to the Bardo; they both explore the same territory - what increasingly anachronistically gets called the unconscious or subconscious mind.

Mama Sutra's portrayal of the Illuminati as the good guys and the Discordians as the bad guys, a reverse perspective from what we've been told, once again demonstrates the use of putting opposites against each other to cancel out. This aligns with Crowley's 0 = 2 formula and follows his instruction to believe equally strongly in the opposite point of view when adamant about something. This can help mitigate the occlusion that certainty fosters.