A bit more on Robert Anton Wilson the 'libertarian' 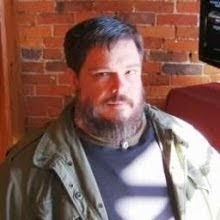 Note: I am told the above illustration is actually a Simpsons caricature of Karl Hess. Kevin Carson uses it as his Twitter avatar.

About Robert Anton Wilson, the libertarian: There is apparently some confusion that I am attempting to tie RAW to the Libertarian Party, or the Cato Institute, or the Paul family, or to whomever else the next Alternet or Salon hit piece is aimed at. Actually, the libertarian group which seems to be closest to RAW's views would be the Center for a Stateless Society, a "left market anarchist think tank and media center." Members of that group whom I follow on Twitter include Kevin Carson, Jeremy Weiland and Chad Nelson. They follow me, too. Chad is assistant editor at antiwar.com and a friend of this website. Two other libertarians I follow on Twitter who have at least some RAW influence are Jesse Walker and Julian Sanchez.

Those who want to explore RAW's political thought might want to look at his "Left and Right: A Non-Euclidean Perspective," also reprinted in RAW's excellent final book, Email to the Universe. He discusses his interest in "individualist-mutualist anarchism" and (TRIGGER WARNING) also describes himself as a "libertarian," as in "like all libertarians, I oppose victimless crime laws, all drug control laws, and all forms of censorship (whether by outright reactionaries or Revolutionary Committees or Radical Feminists)."

Thanks, Tom! Working on an article on RAW's snafu principle that I hope to run at c4ss soon.

I'm relatively that Bob attended and threw quite a few libertarian parties in his brief time on planet earth. I'm also relatively sure that he never belonged to any thing calling itself a Libertarian Party. Bob was a Discordian, and as we all know by know ( I hope) Discordians tend to "stick apart", are more fond of disorganization than Organizations, and tend more to the randy than the Rand.