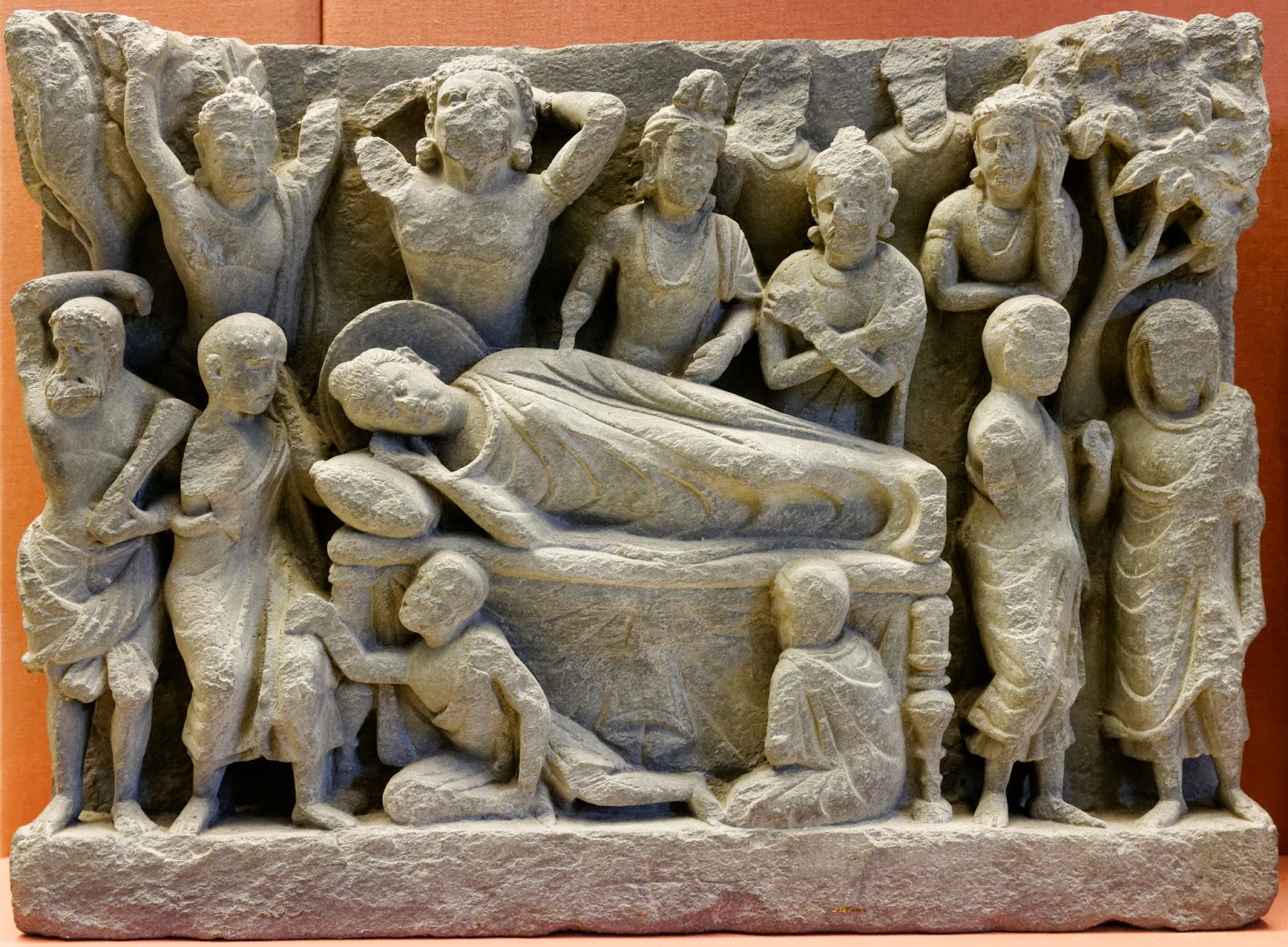 A sculpture from the British Museum, depicting the death of the Buddha. Shortly before he died, the Buddha advised his followers, as Timothy Leary paraphrased it, to think for themselves.

As the Golden Apple begins, many of the plot elements of Illuminatus! are tied together with the last words of mobster Dutch Schultz, who as Illuminatus! says was killed on orders of the Mob because Schultz wanted to kill prosecutor (later presidential candidate) Tom Dewey. As police attempted to question the dying, incoherent mobster, a police stenographer wrote down many of his words, which in Wilson and Shea's telling contain many references to the Illuminati and their relationship with the Mafia and with others.

There is one slight alteration in the novel, which has the Dutchman saying, "They did it. Come on, Illuminati" (page 317). What he really said, according to this transcript, was "They did it. Come on. (A name, not clear)." So, if you like, you can believe that Illuminatus! is set in a parallel world not quite our own, or that They made sure the reference to Them was taken out of the transcript.

Other portions of the Dutchman's words can be read to match plot elements of Illuminatus!, for example, "Please crack down on the Chinaman's friends and Hitler's commander," a reference to the occult creatures mentioned by Lovecraft and others. There is more on this in the next section for the online discussion, when Robert Putney Drake chats with Hermann Hesse.

Meanwhile, some notes on the text of this section:

Mendy Weiss, page 313. one of the assassins of the Dutchman. Executed on the electric chair in 1944.

"I am a pretty good pretzler, Winifred," page 318, another quote from the Dutchman. Winifred is a leader in the Illuminati.

"Camp-town racetrack five miles long," page 319. Famous Stephen Foster song about horse racing track, though I don't understand why is it is quoted here and on page 323.

"Communication is possible only between equals," page 322. Hagbard Celine's rant on the subject reminds me of Neal Stephenson's point in Cryptonomicon, that the American armed forces, more egalitarian than the Japanese, did a better job of correcting mistakes and allowing the communication of ideas.

"To receive light you must be receptive," Hagbard said curtly. "Work that out for yourself." Pages 322-333. A reference to the last words of the Buddha, who in the Mahaparinibbana Suttanta told his followers to rely upon themselves when seeking enlightenment. His words are translated in various ways, but here is one translation:

"Therefore, O Ananda, be ye lamps unto yourselves. Rely on yourselves, and do not rely on external help.

"Hold fast to the truth as a lamp. Seek salvation along in the truth. Look not for assistance to any one besides yourselves."

(Translation quoted from "Buddha's Farewell Address," in The Teachings of the Compassionate Buddha, edited by E.A. Burtt)

(Next week:  Page 324 (And Semper Cuni Linctus, the very night he reamed his subaltern for taking native superstitions seriously" to page 334 "and tellers turned to stare at him.")

Finding the last words of Buddah in the same area where they riff on the last word in of Dutch Schultz I find interesting. I wonder if they included any other last words?

p. 309 This whole page except for attribution, which is wrong, is from a postcard Crowley wrote in late 1941 and sent to all the prominent people he knew as a magick experiment to fight fascism. He called it "Liber Oz." The whole story gets told in Kaczynski's bio "Perdurabo."

"Oz" comes from a Hebrew word which means courage, strength, or power, I've been told. By gematria courage = 216. 216 = 6 raised to the power of 3 ie 6x6x6. It seems like a good place to include it, right after the dedication to their wives and just before chapter 6.

The incorrect attribution seems very likely intentional to suggest Crowley's "Book of Lies" which also supposedly contains an intentionally wrong publication date as RAW noted in "Cosmic Trigger I." There is a chapter "Oz"(77) in the "Book of Lies." That chapter seems relevant both to the spousal dedication and as a key strategy, if you will, to ordeals that lie ahead on the Tree of Life.

p.311 The riff on truth and lying gives yet another example of the complementary opposites throughout the book. This echoes Crowley's 0=2 formula.

I wonder if an "Epistle to the Episkopi" and "The Dishonest Book of Lies actually exists?

p. 312 "The fits about to hit the shan" - more opposites if you interpret "shan" as sh + an and catch the imagery. That sentence reminds me of the number 69. Alchemically, one meaning feeds the other and recalls Joyce's "buildung supra buildung" from FW.

Oz's comment reminds me that the "fit hit the shan" wordplay also is found in Roger Zelazny's award-winning novel, "Lord of Light."

Tom - The Camp-town racetrack starts to make sense a bit later on Page 342.

Great comments!
Pg. 312 - Nkrumah Fubar is mentioned again. We first hear about him on Pg. 8.
Pg. 313 - In reference to the gangsters mentions in Illuminatus! I enjoy the TV show "Boardwalk Empire" which features some of them.
Pg. 314 - I would like to see or read "Tobacco Road".
Pg. 319. The Roman Centurian "Semper Cuni Linctus" is Harry Coin in a past life.
Pg. 321. I love the comment: "They haven't mastered the Gita: the art of fighting with a loving heart."
Pg. 323. I don't get the reference to "a black God"...or elsewhere "Osiris is a black God" can anyone help out with that?