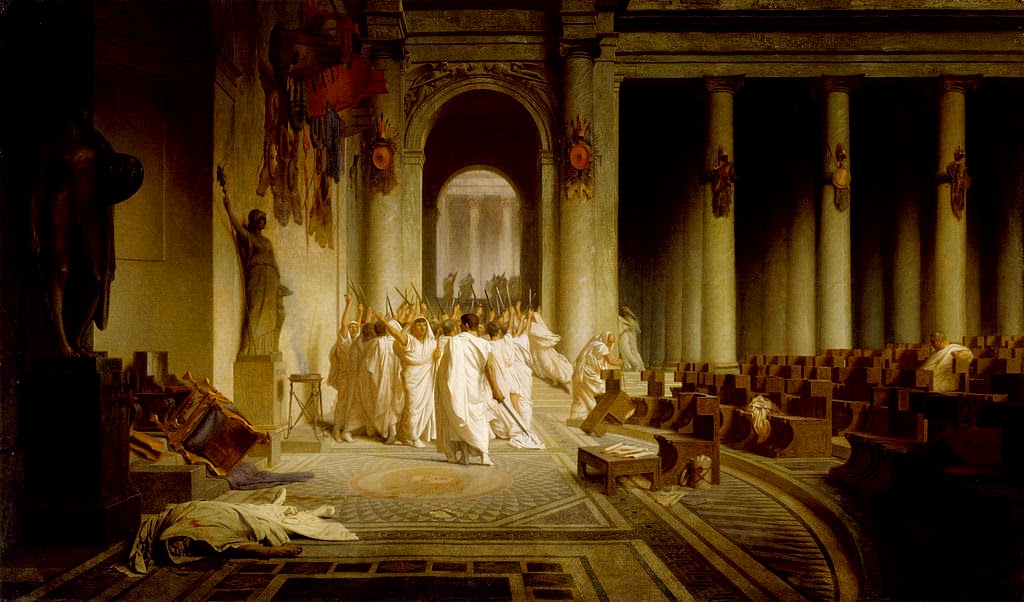 "The Death of Caesar" by Jean-Léon Gérôme, just after the conspirators have pressed home their attack on Julius Caesar by inflicting 23 wounds.

(This week: Concluding pages of The Eye in the Pyramid. Page 292, "RAGS. Hail Ghoulumbia, her monadmen are fled," to page 304, "Every emotion is a motion.)

The end of The Eye in the Pyramid brilliantly ties together the Cthulhu mythos with the occult and with anarchism. It provides a good thematic summary for the book, although of course for a dramatic resolution we have two more books to go.

A fictional metaphor for the National Security state and for the military-industrial complex, and for the way it demands the sacrifice of thousands, regardless of who wins the elections? At the time Illuminatus! was written, the U.S. was involved in the war in Vietnam, which had little to do with national security in a traditional sense. No one believed the Vietnamese were about to invade Hawaii or California.

Perhaps the passage I've quoted, and some of themes of Illuminatus!, come from the peace demonstration which attempted an exorcism of the Pentagon. 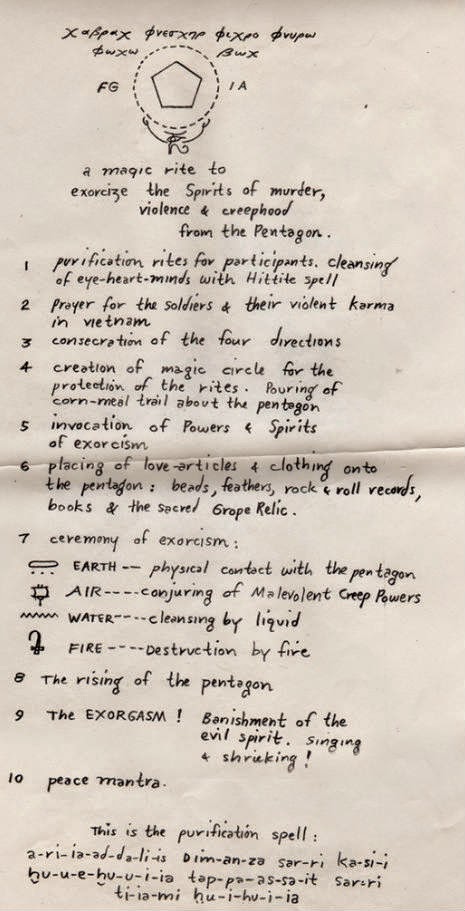 Handbill written by Ed Sanders (of the Fugs, mentioned in Illuminatus!) with instructions for exorcism of the Pentagon, taken from above link.)

Anthropologist J.N. Marsh, page 294. Perhaps it is just a coincidence, but The Fifth Head of Cerberus by Gene Wolfe, considered a classic SF novel, has an anthropologist named John V. Marsch.

Allegro's The Sacred Mushroom, page 294. The so-called "Jesus as mushroom" theory. Controversial, obviously, but Allegro has his defenders, including classical scholar Carl Ruck. I blogged about Ruck.

"I can see the fnords," page 302. Explanation of fnords here. The use of fnords to induce fear in the populace relates to the National Security State.

Suetonius is misspelled, but I pulled my copy of The Twelve Caesars off the shelf, and there is a reference to 23 stabbings. After the initial two stabbings, Suetonius relates, Caesar pulled his gown over his face. "Twenty-three dagger thrusts went home as he stood there." Suetonius also mentions that Caesar was 55 years old when he died, so his death conformed to the Law of Fives.

By the way, my copy of the The Twelve Caesars is translated by Robert Graves, the "Graves" mentioned on Page 294.

(Next week: Prologue to the Golden Apple, available here if you are using the Dell Omnibus edition (which omits it).
on September 15, 2014

I love the way Shea and Wilson tie in Lovecraft on page 293.

I'm traveling and don't have Illuminatus! with me, but will be home in a couple of days and catch up then.

I do, too, Eric, and I also love the way the tie-in to the Cthulhu Mythos is made even more explicit later on, when Lovecraft turns up as a character in the book.

p. 300-301 "...Eater of Souls," suggests that it was some energy or psychic vibration of the dying victim that the Illoigor needed..."

There's a similar idea in Beelzebub's Tales to His Grandson that there are some kind of huge entities that require energy released by death to explain the periodic mass loss of life. However, the theory also holds that this same death energy can get released through ego death, it doesn't have to be physical.

Danny Pricefixer's name qabalistically indicates a healer. The image of lions played a large role for me this week. Upon meeting Bachir Attar in Italy he gave a few of us a small Moroccan lion button. The Egyptian museum in Turin, the biggest outside of Cairo, literally has a few dozen large statues of Sekhmet, the Lion-headed goddess in their collection. Some pharoah commissioned 365 seated and 365 standing statues of Sekhmet, one for each day of the year.

p.303 "Since that seems the most worthwhile cause I've been approached for all day, I gave the lady $1."

It's always nice to give to good causes like MMAM although Muzak was one reason Jimmy Page started Led Zeppelin.

Maybe Nyarlathotep was released from being imprisoned inside The Pentagon in 2001 when a wall was breached?!!

I can never work out for sure, or maybe its mixed up if Danny Pricefixer is in "Arkham - New York" or an "(Lovecraft) Arkham - Massachusetts"

Oz, about "Every emotion is a motion" - I think RAW referred to that in his online course. I will try and find the outline questions. They may be here: https://sites.google.com/site/onlymaybe/illuminatus-trilogy