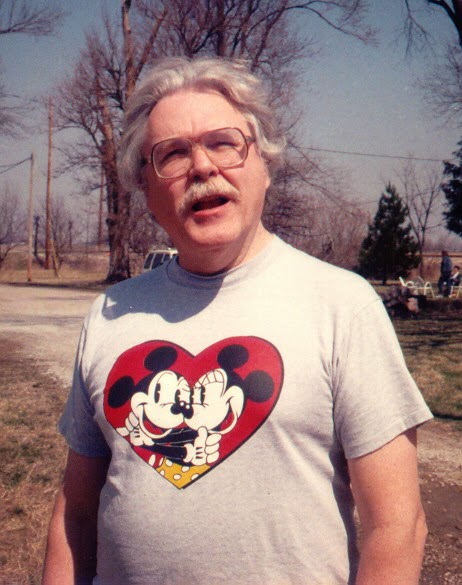 (This week: Page 242, "Waving their crosses over their heads and howling incoherently," to Page 252, "His mother was Norwegian.")

We tend, as we read through Illuminatus!, to focus on Robert Anton Wilson, and his obvious literary influences, such as James Joyce.

And indeed, in the Robert Anton Wilson interview reproduced in Science Fiction: An Oral History by D. Scott Apel, RAW says flatly, "Atlantis is all by Shea."

The introspective passages in the Atlantis segment sound rather like RAW, so perhaps he had a hand in these. But the narrative passages remind me of Shea's novels, the ones he wrote after losing his job at "Playboy" magazine and reinventing himself as a historical novelist.

See, for example, this essay by Shea on his relationship with Larry T. Shaw, the legendary science fiction magazine editor, a piece I found when I tracked down back issues of Shea's fanzine, No Governor. Shea writes, "I met Larry Shaw at a gathering of the Hydra Club, a science fiction professionals' association, in 1959."

"It was founded October 25, 1947 in the apartment of Judith Merril and Frederik Pohl on Grove Street in the Greenwich Village neighborhood of New York. As nine founders were present, the club took its name from the legendary nine-headed monster, the Hydra.

Here is a 1951 article about the Hydra Club by Judith Merrill, featuring a caricature of many of its members.

Notice that on the official Robert Shea page, maintained by his son, Mike Shea, you'll see that Shea's first published stories were in magazines such as "Fantastic Universe" and "If." (I miss "If" and "Galaxy." I know that dates me.)

It's clear from the Shea essay on Shaw that Shaw was a mentor in many ways -- in teaching Shea about how to work at magazines, in helping to introduce Shea to anarchism, in helping Shea with his fiction and in getting Shea involved in science fiction fandom:

Larry was a quintessential science fiction fan. He had come to New York City from Schenectady in the 1940s and had been a member of that legendary science fiction fan club, the Futurians. He was editor of Infinity, a respected magazine that flourished and perished along with the sf boom of the late 50s. He was always working on one fanzine or another.

Larry and his wife Noreen were among the members of the Fanoclasts, and with their encouragement I boldly went deeper into fannish realms than I'd ever gone before. He introduced me to the fascinating people who were active in New York fandom in the 60s and got me to read fanzines from the stacks he kept on his coffee table. He even inspired me to start a publication of my own, a mimeographed literary magazine called The Scene, ancestral to the journal you hold in your hands.

Yikes! Where can I find copies of "The Scene"?

Shea stayed on at "Playboy" after Wilson left and remained in the Chicago area. Wilson explains in Cosmic Trigger 3 what happened next: "When Playboy fired him, Shea endured terrible anxiety about keeping his house, and dashed off a few novel outlines while looking for another job. He sold is first novel before finding a job and never stopped writing again."

Shea's first "solo" novel, Shike: Time of the Dragons, came out in 1981. He published several historical novels before he died of cancer, age 61, in 1994. His widow, the late Patricia Monaghan, is listed on the faculty of Maybe Logic Academy. I exchanged some emails with Monaghan, herself a respected author and expert on paganism, and I was very sorry to discover as I prepared this blog post that she died in 2012. I wish somebody had told me about it at the time. She was a very nice lady and always was helpful to me when I researched Shea for this blog.

Shea's novels are all still available in one form or another, thanks to the efforts of his son, Mike Shea, who maintains the official Shea page.

I am very fond of All Things Are Lights, which I have argued is a "thematic prequel" to Illuminatus! Monaghan wrote to me in a 2011 email, "All Things are Lights is my favorite of Bob's books, I'm glad you wrote about it."

Here is an email exchange I had with Monaghan about All Things Are Lights, taken from this blog post:

I'm very fond of "All Things Are Lights," and I tend to think of it as a kind of prequel to ILLUMINATUS!, as there are references to many topics covered in the other work, such as the Assassins, the Templars, secret societies and so on.

I'm glad you like All Things, which is such a terrific book. You are right in the "prequel" idea in that Bob's interest in secret societies and such folded over from Ill! to All Things, but there was not direct connection. What drove Bob as an historical novelist was an interest in the underdogs of history, the people who were "lost" from a historical point of view. (I keep thinking that Saracen should be made into a movie, now, with the rise in interest in the Islamic world--but of course Bob's Muslim characters weren't terrorists! Well...they were...sort of....) The Cathars were persecuted in what was really a land-grab by the French against the Spanish--in Languedoc today, you can still see, in bars, maps of France before and after the "Albigensian crusade," which make very clear that France exploded in size after grabbing that land. Bob's last published book, Shaman, looked at the Black Hawk War from the Indian side. That was his way--always to focus on the "other" in any historical situation.

Sorry to hear about Patricia Monaghan. We met her at the International Conference on the Fantastic in the Arts years ago and liked her. All Things Are Lights is my favorite Shea novel too.

"Unconsciousness is not the absence of consciousness, but its temporary immobility" p.242

This was a line that WSB repeated in a few of his live readings when discussing the power of suggestion, which, according to him, was particularly powerful when the individual was anesthetized. Here, Burroughs was adapting a anecdotal comment from Dianetics no less! I will look around for an audio clip of it.

I enjoyed the reminder of Shea writing the Atlantis parts of Illuminatus! and I was sad to hear about Patricia Monaghan's death.

Pg. 245. "...they've got the Zwack herself coming after me." - Zwack seems interchageable with "Spiderships". Or are Zwack ships the spiderships come from? The only reference I can find is the alcohol brand? Any other ideas on this name?
Pg. 245. The Thresher - see wikipedia.