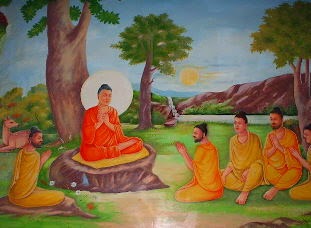 The Buddha gives his first lecture after enlightenment.

What could be more Discordian than a Buddhist sutra delivered during an acid trip by Dr. Ignotum Per Ignotius, one of the personas of Discordianism co-founder Greg Hill?

Malik and Simon are let in by a young man with a "Frisco-style" beard and hairstyle, and it would be appropriate indeed if the setting of the scene was California, where Discordianism was founded and where Buddhism and acid played important roles in the counterculture.

The Buddhas lectures to his followers (or, if you like, sermons) were known as "sutras," and Buddha would address his followers as "O, nobly born," so when Dr. Ignotius addresses Malik in this fashion  he self-consciously turns his talk into a sutra by using the same phrase (page 279).

"Of course, the quirkiest, most chaotic things that exist are other people — and that's why they're so obsessed with trying to control us," page 278. I recently finished reading a book, Nothing to Envy by Barbara Demick, about North Korea, a dictatorship in which one man at the top attempts to ruthlessly control the behavior and thoughts of an entire nation. I'm pretty sure Illuminatus! is not freely circulated there.

Here's the heart of the sutra:

Feeling paranoid? Good: illumination is one the other side of absolute terror. And the only terror that is truly absolute is the horror of realizing that you can't believe anything you've been told. You have to realize fully that you ARE "a stranger and afraid in a world you never made," like Houseman says. (Page 278). 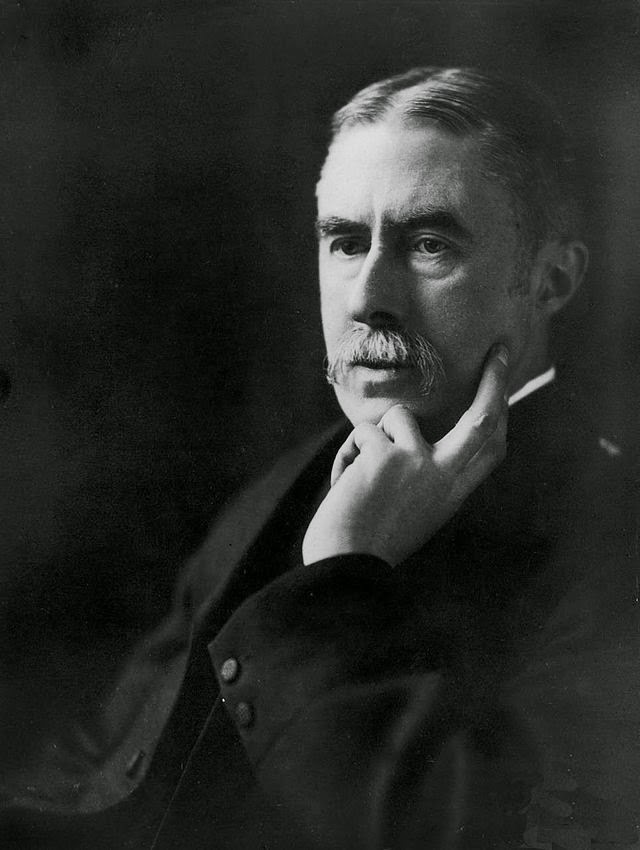 The reference is to Housman, not "Houseman," i.e. A.E. Housman. The quotation is from the Last Poems:

And how am I to face the odds
Of man’s bedevilment and God’s?
I, a stranger and afraid
In a world I never made.

The text is available.

And here is another important point: "The life history which most of us carry around in our skulls is more our own creation than it is an accurate recording of realities," page 281.

(Next week: "There are times when dignity is suicide," page 282, to "that sign is absolutely the whole clue to how the show runs, page 292).

Law corresponds with the Chesed, the 4th Sephira and more specifically with the 4 of Disks. 17 x 4 = 68.
By Joycean fashion you can break up Anarchists as An+arch (or arc)+ is + t + s. An = ALP(Anna Livia Plurabelle)

4 and 17 profit from looking at the tarot and other correspondences from those keys.

So this abstract, non sequitur prose seems a magick formula to me. That it ends up a vehicle - "speedy Caddilac" also seems right on the money.

p.275: "You can call me Doc Iggy ..."
Just prior to reading this, within minutes, I listened to a cd by Iggy Pop called Instinct. I worked on it and plan to write something about because his writing seems very invocational and bardoeqsue. " the unknown explained by the still more unknown," could also describe Instinct. Guitars by ex Sex Pistol Steve Jones.

p.278: "Well part of illumination - and we've got to be illuminized ourselves to fight them - is in learning to doubt everything>"

I have no doubt (just kidding,) this got influenced by ch.51 from the Book of Lies. I highly recommend reading it in conjunction with this page, it seems very relevant up until the rhinos. This seems like the author(s) translation of that chapter.

"like Houseman says" also seems a qabalistic pun and probably explains the mispelling so it would read House + man. Looking at the English names of the sephiroth in 777 then following the correspondences will reveal the pun.

O nobly born also appears in the English translation of the Tibetan Book of the Dead every time the departed spirit gets addressed by the reader. The next 4 paragraphs carries the strong flavor of a reading from that book, a bardo reading, combined with qabala up until "... and you are not Saul Goodman, when you're lost out here." - a phrase that gives a strong voyaging clue.

p. 280: "This is what you must understand, O newborn Buddha"

This also suggests the magick ordeal known as crossing the Abyss which seems cognate with voyaging in the bardo.

A guide to qabala (as RAW stated Illumantus! to represent) = a guide to the Bardo, so no surprise to me that it appears here. They seem different names for the same class of inner space exploration. E.J. Gold also uses qabalistic reference in The American Book of the Dead.

Tom, thanks for all your wonderful work on this blog.

Pg. 272 has a pointer to Schroedinger's Cat with Josephine Malik.

Pg. 275 Clark Gable eating a carrot in It Happened One Night provided the inspiration for Bugs Bunny. John Dillinger saw Gable in "Manhattan Melodrama" on the night of his supposed death.

Pg. 277 I remember seeing a car once with a number of Masonic bumper stickers. One said, "DeMolay Is O.K."