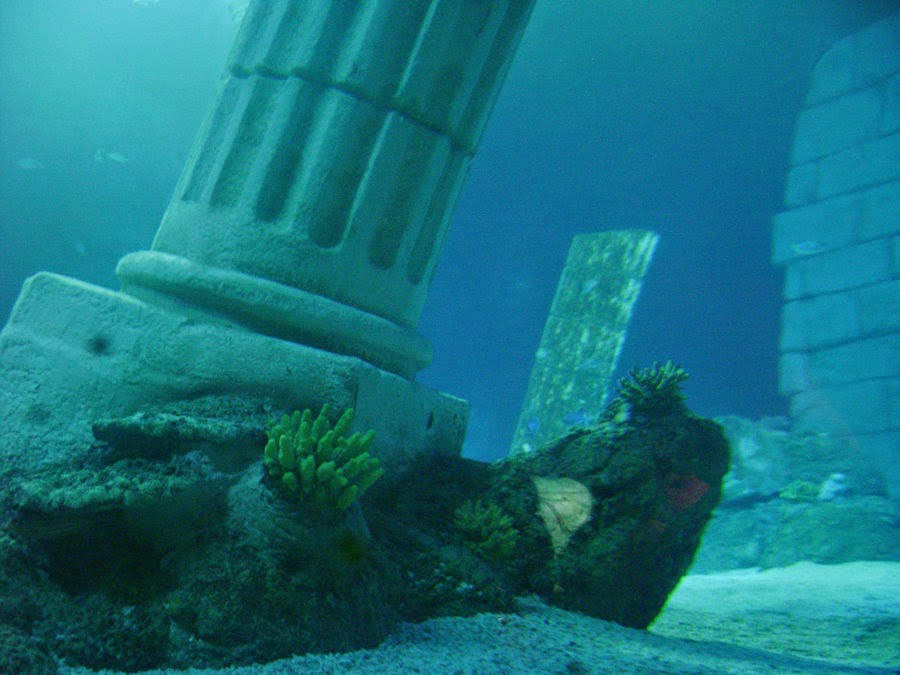 In this section, we get a good dose of Illuminati paranoia and more about Atlantis.

One of my sisters told me a few days ago about an old friend of hers believed she was being spied on by the government all of the time. In a sense, of course, my sister's friend is correct: The U.S. government apparently has telephone records for pretty much everyone. But it's probably not likely that the Tulsa police were personally targeting the woman, although my sister could not convince her otherwise.

On page 256, Hagbard Celine offers five explanations for why the Illuminati either do or do not rule the world; you can take your pick for your favorite. But if you do believe there is an Illuminati, you are allowed to be paranoid about them, whether or not you think they are in charge.

It's been said that Illuminatus! ties together many conspiracies.

There's also a lot of myth, and a lot of romantic history. We get the Assassins, the Vikings (Celine's ship is named the Leif Ericson), Greek myth (in the form of Eris) and Atlantis, a myth which has its roots in ancient Greece. As we noted last week, RAW said that the Atlantis parts were all Shea. And judging from his solo novels, all historical novels, Shea was a a big ancient and medieval history buff.

The Atlantis myth comes from an account in Plato; when I was young, developing my own interest in history, I read about one theory, that the Atlantis account was a distorted account of what happened to a Minoan community in the island of Santorini, destroyed by a volcanic eruption.

Of course, there are many accounts of Atlantis; it would appear that the Illuminatus! account owes something to Ignatius Donnelly's Atlantis: The Antideluvian World.  I don't have time to try to read it now, but Wikipedia says, "Many of its theories are the source of many modern-day concepts we have about Atlantis, like the civilization and technology beyond its time, the origins of all present races and civilizations, a civil war between good and evil, etc."

Wikipedia says that Donnelly's book inspired my favorite Donovan song, "Atlantis," which I once saw the singer perform live, as the opening act for Yes. The song was a big hit in the U.S., although less so in Great Britain, where the single "the single managed only a modest No. 23 placing," Wikipedia says.  Did Wilson or Shea dig the song? 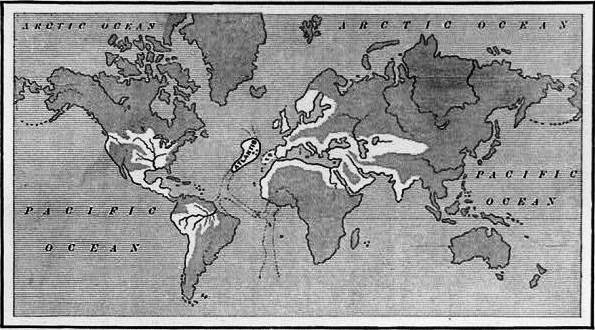 Here is a map from the Donnelly book, showing the empire of Atlantis. Apparently the ancient Atlanteans even occupied what is now the state of Ohio, where I live. The statues George Dorn gazes on "bore resemblance to Egyptian and Mayan," page 257.

Peos, page 255. The name of the Atlantean city of Peos may come from Edgar Cayce, the alleged seer.

Hello from Greece. You know a funny fact? Peos in Greek (Read as peos not pios) is the word for phalus, penis. Ties in with the whole penis vagina ancient "religions".

That would fit with the significance of the eye in the pyramid! Please visit from Greece anytime.

p. 253 Howard's poem about the sea rings true in other circles.

p. 259 " FIVES SEX. HERE IS WISDOM. The mumble of the breast is the mutter of man. - nice Joyce-style qabala. Then "State's Attorney Milo A. Flanagan ..." suggests Finnegan while his whole name presents an image that encapsulates a main theme in Finnegans Wake

p.260: "The god-damned Chicago wind. Flanagan had been fighting it all his life. It had made him the man he was.
Police Sergeant Otto Waterhouse ..."

Pg. 255. "poetry from the Porpoise Corpus." - I love that phrase. Heard it in an Aesop Rock track too.
Pg. 257. I like the touches of language that keep the "3 woman" seperate. eg. "Upstairs minding the store."
Pg. 259. "FIVES. SEX. HERE IS WISDOM. THE mumble of the breast is the mutter of man."
@ Oz, there are several phrases like this scattered in the text that don't make sense to me. You seem to Grok them though. Who do you think is saying them and where? I think it has something to do with Josephine Malik (Joe Malik's mother? or Joe Malik on LSD?)
eg. I. THE FAUST PARSON, SINGULAR. Napalm sundaes for How Chow Mein, misfortune's cookie. See Pg. 272.
Pg. 262. sentence starting "Squinks?" - who is speaking here and where? references back to Swift Kick, Inc subtitle on Pg. 217. and Adam Weishaup language short-circuit bottom Pg. 262.

Since Tom memntioned L. Neil Smith the other day, a sentient dolphin is a character in his novel The Probability Broach.

Dolphins also figure in the story "'Kjwalll'kje'k'koothai'lll'kje'k" in the Roger Zelazny collection My Name is Legion. (This book is a must read, by the way.)

Smith is a big Illuminatus! fan, so it's likely not a coincidence.

I love Roger Zelazny and "My Name is Legion" is one of his good ones.

@Fuzzbuddy, I considered Josephine to be Joe in a parallel or alternate Universe where he is a she. That theme relates to the opening gnostic quote RAW used to begin the first Schrodinger's Cat. I know it was online somewhere.

I don't know which character says:

Often regard these as someone's flash from the subconscious, or if from the Collective Unconscious then does it really matter who?

I just have a way to interpret these kinds of non sequitur, nonlinear passages. As for instance:

SEX = 6 giving us the 5,6 sequence once again, which, as mentioned before, in magick refers to the formula 5=6 - the pentagram and hexagram symbolizing human to divine.
That they write it as SEX, first of all provides a particular kind of shock that grabs the attention, but it also suggests transforming human sex into divine sex.

HERE IS WISDOM, of course, works completely straightforward like all puns should, but also it's a sentence with 3 words that invokes the Father archetype, Wisdom = Chokmah, relating to my opening remarks.

The last, Joycean sentence should suggest a line from Revelations when heard aloud. Comparing the two, perhaps indicates a way to make that SEX divine?